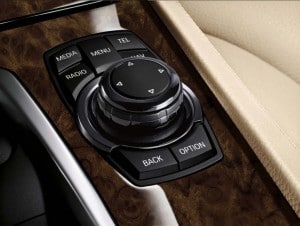 BMW's iDrive helped to start the use of digital technologies in cars more than a decade ago.

Where buyers once measured the value of a vehicle in terms of its horsepower, many motorists today are more interested in the high-tech features that a car offers. And that shift is likely to continue, especially in an era when car-sharing and autonomous technologies transform the way people travel and buy cars, said Dieter May, the head of digital products and services for BMW AG.

The automaker was one of the first to begin introducing digital technologies into the cabin with the debut of its iDrive system on the 2001 BMW 7 Series sedan. Initially seen as a way to minimize the number of buttons and knobs in the cabin, the iDrive has now become just one of the ways to access and control various vehicle functions and services.

On Thursday, BMW officially announced plans to upgrade its suite of features, renaming its service BMW Connected +. These include such things as the ability to stream audio from services like Spotify to in-car security systems that can call for help after a crash. The Bavarian automaker is also getting ready to offer over-the-air, or OTA, updates, that will let it download software updates for in-vehicle technologies that, until now, required a motorist to go to a dealer to have installed.

“You have the opportunity to keep a vehicle fresh,” by adding new features and services at a pace not previously seen, said May, during a media presentation in Chicago where several of BMW’s technology partners are based.

One of the more intriguing features included in BMW Connected + will upgrade the now-familiar onboard navigation system so that when a route is plotted out it will also show recommended places to refuel and even take a break. The service will be able to check traffic, meanwhile, to know when you have to leave for an appointment, prompting you, for example, to head out earlier than normal. 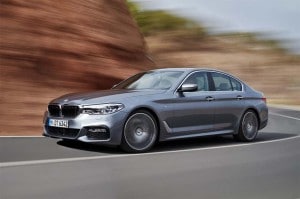 The new 5 Series is one of the early BMW vehicles that will use the company's new BMW Connected Plus technology.

By offering an array of services and features, he added, BMW believes it can boost its loyalty rates – measured in returning customers – several percent, “which is worth millions of dollars,” May added. That’s on top of potential revenue streams from various paid services.

The automaker is working to develop many of the technologies in-house, notably including the capability to use OTA updates. But it is also partnering with an array of high-tech firms who can bring specialties that BMW doesn’t think it could, or should, develop inside. Most notable among these partners is Microsoft, which developed the underlying platform for BMW Connected +.

Virtually every new BMW now has some degree of digital technology onboard, about 8.5 million cars and utility vehicles, in all. In the short time since the maker began rolling out the latest update of its connected services it has 1 million customers signed up.

“We have a target by next year that all cars we bring to market will be BMW Connected Cars,” May said during his presentation, adding that “digitalization is all about scale.”

The Connected + system links the vehicle to the cloud to let it deliver an array of new services. Motorists don’t even have to be in the car, in fact, to take advantage of the new system. Those who have one of the new Alexa personal assistant devices from Amazon, such as its Echo and Echo Dot, can essentially talk to their cars from home or office.

A number of features are still under development, May revealed. Going forward, motorists will be able to quickly find out what it means when a “check engine” light comes on, possibly avoiding a trip to the dealer service department if the problem can be fixed remotely.

Getting into digital services will become even more important in the future, May said, as more consumers turn to ride-sharing services, and as fully autonomous vehicles start coming to market. In a self-driving vehicle, in particular, BMW will want to be able to keep passengers engaged, whether by streaming “content,” said May, or perhaps by giving them the opportunity to go shopping through the link-up with Amazon.

BMW is looking at the opportunity to partner with other companies developing their own digital voice assistants, he added, including Apple, Microsoft and Google.

Along with BMW Connected +, the maker is launching several other new features. BMW ID knows a lot about each motorist, storing numerous preferences in the cloud so, for example, you could have destinations or vehicles settings follow you as you get into a different BMW vehicle.

(BMW upping production to 3M units by 2020. Click Here for the story.)

The partnership with Microsoft and another with Skype, meanwhile, will make it easier to work while traveling. You will get secure access to your Microsoft Exchange e-mail server for example, and could tap the iDrive to instantly dial into meetings. These are features that could gain significant traction with the arrival of autonomous driving.