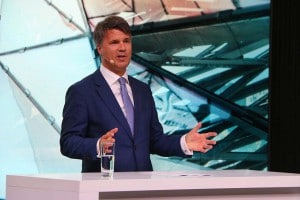 BMW CEO Harald Krueger plans to tell shareholders that the company is looking to reclaim its "rightful" place atop the luxury sales heap.

BMW AG expects to put more of its vehicles on the roads in the next few years. The German maker plans to raise its annual production to 3 million vehicles by 2020 — a 27% increase over last year’s numbers.

President Donald Trump is likely to be happy with the news, sort of. North American production will be on the rise moving from 410,000 units to 750,000 by 2020, according to German newspaper Hadelsblatt.

However, some of that will come from Mexico while other parts of the increase will come from the maker’s plant in South Carolina. Trump has been haranguing automakers foreign and domestic to build more vehicles in the U.S. or face some sort of punitive action — which has not happened yet.

Additionally, some of the production growth will come from the expansion of China-based manufacturing capabilities for the maker, which plans to begin building its X5 sport-activity vehicle in China in the near future.

BMW Group, which includes the Mini and Rolls-Royce brands will double its production capacity in China to 600,000 cars, Handelsblatt reported.

The moves are part of BMW’s new assault on luxury sales leader Mercedes-Benz. For several years, BMW held the global luxury sales lead; however, with an onslaught of redesigned products Mercedes has surged back into the lead.

Handelsblatt reported that CEO Harald Krueger plans to tell shareholder the company is “going on the offensive at BMW’s annual meeting, to reclaim its “rightful” No. 1 spot in sales. BMW declined to comment on the Handelsblatt report, Reuters reported.

While the war may be heating up between the two leaders, sales in the U.S. are not even lukewarm BMW and Mercedes saw sales slide in April — as competitors Audi, Jaguar, Land Rover and Volvo saw an uptick.

However, last month was an outlier for BMW in the U.S., which saw sales rise 5.3% in the first quarter of this year. This accounted for all three of BMW Group’s units: BMW, Mini and Rolls-Royce. However, if just BMW sales are broken out, it recorded a healthy 5.2% jump year-over-year for Q1 in the U.S.

Despite predictions of a slide for 2017, it appears that the luxury segment is just heating up in the U.S., which bodes well for BMW’s production expansion.