Order Up! Ford, Amazon and Starbucks Team Up, Give Hint of Connected Car’s Future

New service a prelude to array of in-car services to come. 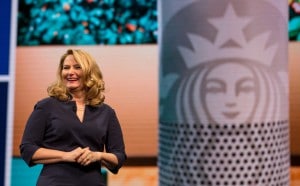 For many Americans, the day doesn’t begin without a cup of coffee to go for the morning commute, and a new alliance between Ford, Amazon and Starbucks should make it a little faster and easier to order and pay for that cop of java.

At its annual shareholders meeting in Seattle on Wednesday, Amazon officials confirmed Ford vehicles equipped with the maker’s latest Sync3 infotainment system will be able to order and pay for their coffee by connecting to the Amazon Alexa voice assistant. It’s just the first step in what could come, over the next few years, as automakers expand the capabilities of their increasingly connected cars.

“It only takes a little imagination to think about where conversation ordering will show up next,” said Gerri Martin-Flickinger, Starbucks chief technology officer, as she showed off the new technology.

For his part, Ford CEO Mark Fields has said the carmaker prefers to now view itself as a “mobility company,” rather than an automotive manufacturer. That means it is expanding its focus to include such things as ride and car-sharing. It is also looking for new ways to let motorists connect to the outside world.

And that’s something expected to become increasingly important as the era of autonomous driving becomes a reality – all the more so if that includes completely driverless vehicles that will transform the vehicle into a lounge on wheels. Ford, for its part, has promised to begin producing its first driverless models in 2021, primarily for ride-sharing services, such as Uber and Lyft.

(Ford, Amazon want to Sync you up with Alexa. Find out more, Click Here.)

Even before that sci-fi concept becomes an everyday reality, however, automakers are looking to give motorists more options to connect with the outside world, whether to play smartphone apps through new technologies like Apple CarPlay and Android Auto, or by integrating voice assistants – like Alexa, Apple’s Siri and Microsoft’s Cortana – into the vehicle. 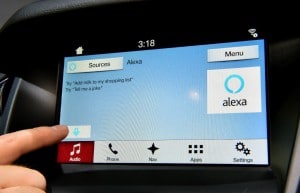 Amazon and Starbucks already teamed up in January, Alexa getting a new “skill” that allowed a customer to place their “usual” order and have it waiting at one of the stores they have visited recently, Alexa even handling the charge through Starbucks’ Mobile Order & Pay function.

Ford, meanwhile, has begun incorporating Alexa into new vehicles equipped with its latest Sync 3 infotainment software. Starting later this year, that will allow a motorist to place a Starbucks order as they’re heading to one of the coffee shops. Ford already has a similar partnership allowing Sync users to order a pizza from Domino’s.

Expect to see similar alliances in other brands in the near future, Volkswagen announcing at the Consumer Electronics Show in January that it was also set to give Alexa a home in its cars. It will become part of the German maker’s Car-Net system. Hyundai this year integrated the Amazon voice assistant into its Blue Link system.

Fiat Chrysler Automobiles has opted to partner with Google, and is pairing the Google Assistant with its UConnect infotainment system, while Nissan and BMW are partnering with Microsoft and Cortana.

(Click Here to see why getting that morning joe may be important.)

With its home Echo devices, Alexa has established the largest base for such services. And “she” has been adding skills to its repertoire since its launch in late 2014, and it can be used to place orders for a variety of goods and services. Observers expect to see more of these partnerships develop in the near future.

Automakers seem especially eager to form such alliances. Ford has been aggressive in marketing Sync since it first introduced the technology, company research showing that it has helped attract many buyers – digitially minded Millennials, in particular – who consider high-tech features more important than horsepower ratings.

But automakers also are looking for ways to directly monetize their services as another gateway to consumers.

“The new asset in the automotive business is data,” said Danny Le, principal and automotive leader, at KPMG.

There is a potential downside, Le warned, noting that “Data is becoming a currency, with actual value, and it must be protected. Security needs to be invested in.”

There have been a number of demonstrations by security experts showing the potential to hack into vehicle electronics systems, though no known real-world incidents – yet. But the National Highway Traffic Safety Administration last year declared vehicle cybersecurity one of the most important issues for the auto industry to address in the coming years.

Giving cars the ability to order goods – and to pay for them – adds another potential wrinkle. But that risk seems to be doing little to slow down the push for in-car digital services. It might just give security experts a chance to caffeinate themselves as they head to work.