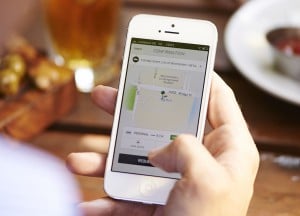 A subscriber orders a car through the Uber app.

Use the ride-sharing app on your smartphone and you’re likely to have a driver pull up in some basic econobox. Sign up for one of the car-sharing services and you’ll usually find a similarly no-frills model waiting as you rent by the hour.

But Mercedes-Benz wants to take things a bit upscale as it announces new deals with Uber, the largest American ride-sharing service, and short-term rental company Car2Go.

Automakers from around the world have been rushing to find new ways to expand into new mobility services ventures. General Motors, for one, went so far as to invest $500 million into Uber’s prime competitor, Lyft, last year. But the new Mercedes-Benz deals could give reason for upscale motorists to try out ride and car-sharing alternatives.

(Click Here to learn why Mercedes has taken the global luxury sales lead.)

Mercedes’ parent Daimler AG’s deal with Uber has a unique twist: the cars it plans to provide the ride-sharing service will be autonomous. Uber CEO Travis Kalanick has outlined plans to eventually fill his fleet with fully driverless vehicles that could cut costs so low it would be cheaper, he promises, to ride with the service than actually owning a private automobile. 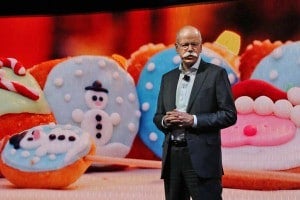 “Auto manufacturers like Daimler are crucial to our strategy because Uber has no experience making cars — and in fact, making cars is really hard,” Kalanick said in a blog post explaining the new partnership.

Unlike other autonomous vehicle projects it has underway, Uber will leave the keys with Daimler, so to speak, the German maker in charge of developing the autonomous systems in the Mercedes vehicles. Mercedes has, over the last several years, shown a variety of autonomous and fully driverless concept vehicles, such as its F 015 prototype.

“Mobility service providers offer an ideal platform for autonomous driving technology and Uber is a leading mobility platform company,” said Daimler CEO and Mercedes brand chief Dieter Zetsche. “The real revolution in future mobility lies in intelligently linking the four major trends we call CASE: connectivity, autonomous driving, sharing and electric mobility. And we will certainly be the driver of these changes.”

Uber has already been experimenting with autonomous vehicles – those still requiring a backup “operator.” It is running a small fleet of self-driving Ford Focus sedans in Pittsburgh, where it also has an autonomous vehicle research center. And in December it briefly started a second pilot in San Francisco using modified Volvo XC90 SUVs. That program was scrubbed a week later, however, due to Uber’s decision not to apply for a California permit. It has since moved the Volvos to Arizona.

As for the deal with car-sharing service Car2Go, Daimler has already had a long-standing relationship through its Smart brand. But the Mercedes partnership takes things from drab to exotic. 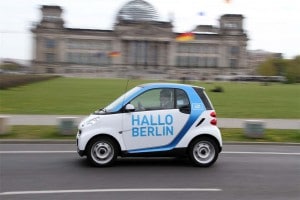 A Smart car in Berlin, part of Daimler's initial alliance with the Car2Go car-sharing service.

The service won’t be offering the most exclusive Mercedes models. No S-Class, or even E-Class sedans and coupes. But the coupe-like CLA sedans and GLA crossovers nonetheless represent a step-up for Car2Go.

“Today, we take another step towards the future,” said Zetsche, stressing Daimler’s commitment to car-sharing and other alternative mobility ventures.

The Mercedes models will be offered on an hourly rental basis starting this week in Austin, Texas, Portland, Oregon and Seattle. The partners have not announced if and when the line-up of luxury models would expand to other Car2Go locations.

But competition is clearly heating up in both car- and ride-sharing segments, encouraging more experimentation — and more attractive products.

Daimler’s two German rivals, BMW and the Volkswagen Group, are both partnering in various mobility efforts, as are other major makers such as Toyota, Ford and GM. The latter has even launched its own car-sharing venture, dubbed Maven, currently expanding to a number of cities across the U.S.

Some experts have suggested that car sales could actually start to decline in the U.S. and other major markets by the mid-2020s, especially in major cities, as car buyers abandon their personal vehicles in favor of various sharing alternatives.

(Even ride-sharing services Lyft and Uber get caught up in political turmoil. Click Here for the story.)