New teaser offers closer look at what is expected to be EV SUV. 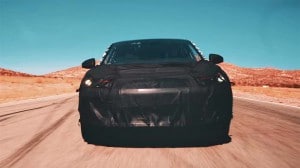 Faraday Future plans to go full speed ahead with its new sport-ute concept, which it will show at the upcoming Consumer Electronics Show.

Despite financial problems serious enough to put on hold construction of its new Las Vegas factory, battery-car start-up Faraday Future plans to go ahead with the unveiling of its first production model at the Consumer Electronics Show four weeks from now.

The California-based, Chinese-backed Faraday made its official debut at CES last January, but the exotic sports car it revealed at that splashy Las Vegas event is expected to be replaced by a more conventional-looking electric SUV.

A teaser image released this week by Faraday shows the nose of the production car, appearing to fill in some of the missing details from a short video the company put out in October showing a camouflage SUV blasting around a desert race track.

The new model appears far less exotic than the Faraday FFZero1 supercar concept unveiled at the 2016 CES. But if the company does go into production with a battery SUV that would target a much more mainstream part of the American market – as well as fitting trends in China, where the utility vehicle segment is also booming.

The first of the new teaser images has a bit of a retro-futuristic look to it. There are some very modern, slit-like LED headlamps, but they frame a light bar that might have been inspired by the ‘80s-era Mercury Sable. 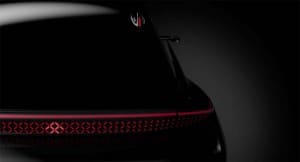 Faraday Future plans to head to market with its new SUV concept in spite of temporarily halting construction on its new factory due to money issues.

What you discover from looking at the second teaser image appears to be a camera, rather than a conventional mirror, sticking out of the car’s right side. Faraday is just one of many automakers that would like to eliminate sideview mirrors – something that would reduce both aerodynamic drag and wind noise.

The problem is that this approach has yet to be approved by the National Highway Traffic Safety Administration, even though several carmakers, including Tesla, have petitioned for the necessary rule change. Faraday just might be hoping to see the regulations revised by the time it gets into production. If so, it is likely also working on a more traditional solution in case the feds don’t make the necessary move.

The teaser images meanwhile also show another, silver-colored appendage that could be a laser-based LIDAR sensor. That just might be part of the vehicle’s advanced driver assistance technology. Like Tesla and other battery-car start-ups, Faraday has indicated it wants to add autonomous driving capabilities to its products.

The bigger question is when will Faraday Future get into production? It broke ground on a site near Las Vegas last April, at the time promising to have the first car rolling off the $1 billion assembly line sometime in 2018. 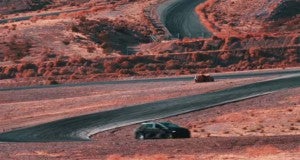 The concept SUV Faraday Future is bringing to CES gets put through its testing paces.

“Our aim is to complete a program that would normally take four years and do it in half the time, while still doing it right,” Dag Reckhorn, the head of global manufacturing, said at the time.

But last month, word began to leak out that Faraday was putting construction of the plant on hold due to financial problems linked to its primary backer, the Chinese billionaire Jia Yueting. That led Nevada State Treasures Dan Schwartz to call the project a “Ponzi scheme.”

“You have a new company that has never built a car, building a new plant in the middle of the desert, financed by a mysterious Chinese billionaire,” Schwartz told the Reuters news service last month. “At some point, as with Bernie Madoff, the game ends.”

Faraday officials later confirmed the delay, but told TheDetroitBureau.com that construction will resume in early 2017. Whether they can work things out by then remains to be seen, but the delay is expected to be as hot a topic at the CES unveiling as the new battery-car Faraday plans to unveil.

Incidentally, LeEco, another new battery-car company also backed by Jia is running into its own financial problems, the Chinese entrepreneur revealed in a letter to employees last month.