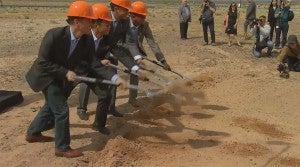 Officials dig in at the May groundbreaking ceremony for the new Faraday Future plant outside Las Vegas.

The ambitious Chinese automotive start-up Faraday Future may be running into serious financial problems forcing it to halt construction of a $1 billion assembly plant near Las Vegas.

But then again, maybe it isn’t, the automaker telling a Chinese newspaper that work on the factory continues.

Faraday made its official debut last January during a splashy event at the Consumer Electronics Show. The company recently said it will reveal its first production model at the next CES less than two months from now. Meanwhile, it has been working on a sprawling assembly plant in the Nevada desert that it promised would create as many as 4,500 jobs.

But a Reuters news service report claimed that Faraday has missed several payments to its contractor that has put construction of the plant on hold.

“This is a Ponzi scheme,” Nevada State Treasures Dan Schwartz told the wire service. The state had come up with $200 million in incentives to secure the plant. 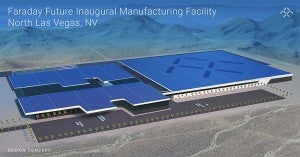 Set to open in 2018, the Faraday Future plant will eventually employ 4,500, the company says.

“You have a new company that has never built a car, building a new plant in the middle of the desert, financed by a mysterious Chinese billionaire,” said Schwartz. “At some point, as with Bernie Madoff, the game ends.”

The “mysterious” investor is Jia Yueting, who made a fortune in the Chinese consumer electronics business. He not only has funded Faraday Future but also another start-up, LeEco. That firm showed off its first model, a battery-electric vehicle called the LeSee, last month in San Francisco, but the event went south when the prototype ran into technical problems and couldn’t be driven onto the state.

Jia has set up a network of companies in both China and the U.S. working on products as diverse as smartphones and battery cars. He reportedly said last week the LeEco operation was running short of cash after expanding too fast. But reports from China this Tuesday said the firm had secured $600 million in funding from the Chinese government.

As for Faraday, the start-up confirmed in October that six top executives have left the company in recent months. A spokesman also was quoted saying the company is “refocusing its resources,” with an emphasis on launching the first product.

According to Reuters, Faraday missed several payment deadlines to its contractor AECOM.

Calls by TheDetroitBureau.com to get clarification on the status of the Las Vegas plant have so far not been returned.

But the South China Morning News, in an online report, said Faraday has refuted reports that the plant project has been put on hold. The paper quoted Faraday saying that, “it’s poised to begin construction of the second phase of its Nevada factory in February 2017.”

Were the Faraday plant project collapse it could be seen as a personal embarrassment for Gov. Brian Sandoval. He has been pushing hard, in recent years, to diversify the Nevada economy beyond gambling. Sandoval was a key proponent for the Faraday deal, as well as the $1.3 billion package of government aid provided Tesla, another battery carmaker, to set up its massive battery plant near Reno.