New car buyers are trading in vehicles with more negative equity than ever — almost $5,000 on average.

A new statistic reveals that these days if Americans want a new car, truck or utility vehicle, they’ll do just about whatever it takes to get a deal done — including taking a huge hit on their trade in.

According to Edmunds.com, about 32% of all vehicles traded in on a new vehicle through September this year were “upside down.” That is to say, the owner owed more on the vehicle than it was worth, and the number is rising. It was 30% for the same period last year.

That negative equity averaged $4,832. In short, add $5K to the price of that next vehicle being purchased.

“It’s curious to see just how many of today’s car shoppers are undeterred by how much they owe on their trade-ins,” says Edmunds.com Senior Analyst Ivan Drury. “With today’s strong economic conditions at their back, these shoppers are willing to absorb a significant financial hit to get into a newer vehicle.

“In fact, shoppers with this mindset may want to consider jumping on the leasing bandwagon. They can get into a new car with great technology every few years without having to worry about how much they still owe on their trade-in.” 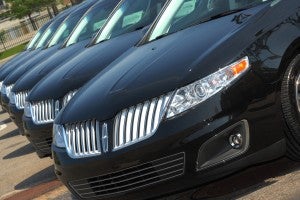 Leasing rates are on the rise as new vehicle buyers look for ways to cut down their monthly payment.

Relaxed credit levels and longer loan terms are making it easier for buyers to roll the negative equity into the loan on the new vehicle. The result? The monthly payment on a new vehicle loan is $505 — the highest level ever, Edmunds notes.

That higher-than-ever payment is because the average new auto loan was $29,880 in the second quarter of this year, according to Experian Automotive: a 4.8% jump compared with last year. That new-record loan is also coming with a longer term than ever.

The average new car loan is for 68 months, but subprime borrowers are getting loans averaging 72 months, or six years. And longer terms are becoming more and more popular. According to Experian, extended loans, ranging from 73 to 84 months, accounted for more than a quarter of all new vehicle loans in 2015.

(Average age of U.S. vehicles continues to rise. Click Here for the story.)

The appeal is clear. The payment on a 36-month car loan for $25,000 at a 4% annual percentage rate, is $738.10. If it’s extended to 84-months, the payment is just $341.72. While extended loans reduce monthly payments, they also make it more difficult, if not impossible, for a buyer to get any equity in the vehicle.

It’s not just new cars either. Some buyers may consider moving to a used car as a get out debt jail free card. Edmunds notes a record 25% of all trade-ins toward a used car purchase in the third quarter had negative equity: an average of $3,635, which is also a Q3 record.

Buyers who don’t want a crazy high loan payment or a crazy long loan term, but still want a crazy expensive new car are turning to another option in higher numbers than ever: leasing. Leasing rates now exceed 30% for new vehicle sales, the highest number ever.

(Automakers get into Black Friday spirit. For the story, Click Here.)

In general, new car leasing is at its highest level ever. Leasing made up an estimated 33% of new car transactions in 2016, through October.