But that’s “not yet a cause for concern.” 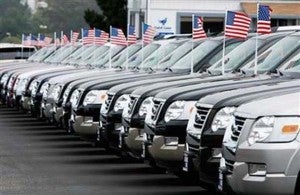 Car dealers have been seeing record numbers of shoppers - but loan delinquencies are rising, too.

More expensive loans aren’t the only reason for automakers to worry, industry analysts are warning. There are signs that more consumers are having trouble handling the loans they’ve already taken out.

With a record number of Americans buying new vehicles last year, lenders logged a record amount of debt on their books. And a growing number of those buyers are falling behind on payments, according to Experian Automotive. While 30-day delinquencies are actually down, the number of motorists two months behind on payments grew sharply.

“Given that we’ve seen an increase in loans to subprime and deep-subprime consumers, it’s natural to see a slight uptick,” explained Melinda Zabritski, senior director of automotive finance for Experian. “Although not yet a cause for concern, the industry should keep an eye on this metric to see how it trends in the quarters to come.”

The percentage of new car and truck buyers now at least 60 days behind on payments rose to 0.77% during the fourth quarter of 2015, up from 0.72% during the same period the year before. Those behind by just 30 days dipped to 2.57% from 2.62% over the same period, according to Experian data.

The consumer tracking firm noted that the total amount of automotive debt Americans have rung up reached $987 billion during the October-December 2015 quarter, an 11.5% year-over-year increase.

“This marks the highest level on record since Experian began publicly tracking the data in 2006,” Experian noted in a summary of its latest auto lending report.

More than a third of that debt, about $337 billion, was held by banks which saw their total new automotive loan portfolios jump 22.5% from the final quarter of 2014. Credit unions reported a 15.9% increase.

Automakers’ so-called captive finance subsidiaries, such as Ford Motor Credit, saw more modest 6.3% year-over-year growth. They had $244 billion in in outstanding loans as of Q4 2015.

Lending has been on a rapid rise since the auto industry began to recover from the worst recession it had experienced in decades. And one of the fastest areas of growth has been in sub- and deep-subprime loans. The total share of the automotive debt accounted for by this riskier loans climbed from 20.3% during the final quarter of 2014 to 20.8% at the end of 2015.

Despite a rise in extended delinquencies, Zabritski cautioned that the numbers remain “modest and relatively low from a historical perspective.”

But financial analysts are watching trends closely, as a surge in delinquencies signaled the onset of the Great Recession which, in turn, saw new vehicle sales in the U.S. dip below 10 million. Last year, sales hit an all-time record of 17.5 million, and most observers expect that to rise again, albeit more slowly, in 2016.

The pace of growth could depend upon what the U.S. Federal Reserve does in the months ahead. It recently ordered the first prime rate hike, of 25 basis points, in a number of years. Equal to a quarter percentage point, that could cut industry sales by as much as 250,000 units in 2016, warned Dave Zuchowski, CEO of Hyundai Motor America.