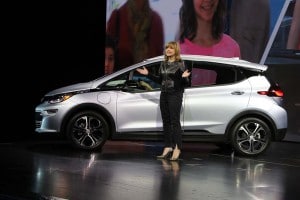 GM CEO Mary Barra with the Chevy Bolt, which is the basis for Opel's new EV offering, the Ampera-e.

General Motors’ European Opel subsidiary is set to get its first long-range battery-electric vehicle in 2017.

Speaking at an industry conference, GM CEO Mary Barra said Opel will launch the new Ampera-e in a bid to target a mainstream audience looking for longer range than current electric vehicles can offer.

“Like its twin, the Chevrolet Bolt EV, the Ampera-e promises to transform the electric vehicle market in Europe as the first EV that combines long range at an affordable price,” Barra said.

Barra pulled the wraps off the Chevy Bolt early last month during a splashy and well-attended preview at the Consumer Electronics Show in Las Vegas. It got its first public showing a week later at the 2016 North American International Auto Show in Detroit.

Opel's getting its own long-range, yet affordable electric vehicle: the Ampera-e.

The Bolt uses a new, 60 kilowatt-hour lithium-ion battery pack able to deliver 200 miles per charge – more than any current electric vehicles but those offered by Tesla Motors. Tesla is also shooting to deliver a more affordable, long-range battery car, but while it is about to begin taking orders for the Model 3, that mainstream offering isn’t expected to reach showrooms until well into 2017, a year or more behind the Chevy Bolt.

GM isn’t offering many details about the Opel Ampera-e, other than to indicate it will share the same underpinnings as the Chevy Bolt. It might actually receive a somewhat higher range rating than its U.S. cousin due to the less stringent testing procedures used by European authorities. 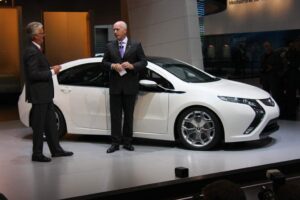 The Ampera-e previewed at the Geneva Motor Show in 2009 and is finally coming to reality as a clone from the Chevy Bolt.

As for design, Barra didn’t show any renderings of the Opel electric, but GM officials did indicate it would be a five-seater, like the Chevy Bolt, with the cargo space of a compact car.

Bolt’s tall, crossover-like seating results in a near-midsize interior for up to five passengers, despite having a subcompact exterior footprint.

That extra room will be put to the test, as GM intends to put Bolt into service through the ride-sharing service, Lyft. It announced a $500 million investment in the high-tech taxi alternative last month.

This won’t be the first time Opel has offered an electric option. Like Chevy, it launched an extended-range electric vehicle a half-decade ago, the Opel Ampera sharing the same underpinnings as the American Chevrolet Volt. Ampera’s exterior design was actually considered better than Volt’s. But sales lagged behind its U.S. near-twin, and the Ampera was pulled from production last year.