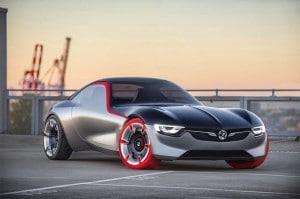 The Opel GT Concept will make its formal debut at the 2016 Geneva Motor Show.

German-based Opel doesn’t have much visibility in the U.S. market, but it could generate quite a buzz here – as well as in the home European market – when it formally unveils its new GT Concept at the Geneva Motor Show early next month.

The original Opel GT, dating back to the 1970s, was one of the few – and last – models imported under that brand name, though Opel designs have since made it across the Atlantic and shared with sibling General Motors brands. The old Saturn Astra and the new Buick Cascada convertible are two examples.

The new Opel GT Concept harkens back to the original 2-seat sports car concept, the Opel Experimental GT, of 1965. It was followed a year later by the Vauxhall XVR from Opel’s British twin. A production version went on for a five-year run, from 1968 to 1973.

It boasts the same, long nose, short rear deck and muscular haunches – though it foregoes retro touches like the original sports car’s pop-up headlamps. Despite a design that is, in current styling lingo, “heritage,” the new Opel GT Concept is very much a modern take on sports car design, even a bit avant-garde, the carmaker suggests.

‘We created the GT Concept to capture the bold, emotional spirit of both the Vauxhall and Opel brands,’ said Mark Adams, GM’s vice president of design for Europe. ‘It is dramatic, sculptural and full of innovations, which is our great tradition that we intend to continue. This coupe impressively demonstrates the continuous development of our design philosophy.’ 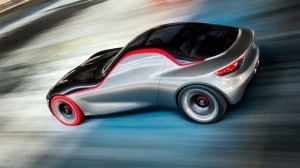 A rendering shows the Opel GT in action.

Visually, perhaps the most striking element of the new Opel GT Concept is the design of the doors, which flare into the front fenders, right up to the wheel arches. The carmaker claims it has developed an unusual hinge system that allows for easy access even in tight, urban parking spots. To open the doors, driver and passenger tap a touchpad hidden in the roof “signature line.”

As has become de rigueur on futuristic concepts, the Opel GT swaps out conventional sideview mirrors for twin cameras mounted just behind the wheel arches. Their images are displayed on separate monitors on either side of the cabin.

Once considered a touch of science fiction, such cameras are considered more and more likely to become an everyday reality by decade’s end as automakers seek ways to improve fuel economy by reducing drag. Several manufacturers, including Tesla, have petitioned the National Highway Traffic Safety Administration to revise its rules to permit the use of sideview cameras. Opel’s sibling Cadillac, meanwhile, is introducing a camera-based rearview mirror option for the new CT6 sedan.

Another visually distinctive element of the GT is the use of red accents, including both the stripe that links the hood and roof, as well as the red front tires. These details, Opel said, “pay homage in an avant-garde way to the Motoclub 500, a futuristic Opel motorcycle from 1928 that wore red rubber.” 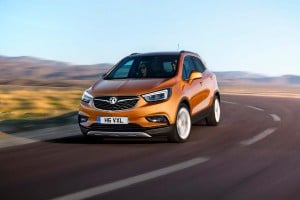 A Vauxhall version of the new Mokka X.

Another intriguing touch finds the windshield flowing directly into an all-glass roof that gives the Opel GT a targa-like feel.

Incidentally, that long hood on the Opel GT Concept is a bit misleading. The powertrain it conceals is a pint-sized 1.0-liter 3-cylinder package making 143 horsepower and 151 pound-feet of torque. The all-aluminum engine is part of the family used in such production models as the current Opel Astra.

Despite it modest size and output, it should give reasonable punch for a vehicle that would weigh in at less than 2,200 pounds, Opel claiming it could launch from 0 to 60 in under eight seconds.

As for production, while Opel could use an image boost in its bid to regain some of the market share it’s lost in recent years, there appear to be no firm plans to put the Opel GT Concept into production. Perhaps a strong response from Geneva Motor Show-goers will get the GM brand to reconsider.

(Live from Chicago! Click Here to check out all the new product and news from the Windy City auto show.)

For now, Opel – and Vauxhall – customers will have to settle for the new Mokka X also making its debut at the annual Mondial de l’Automobile. This downsized Mokka SUV has been one of the biggest his Opel has had in recent years, and the maker is looking for an even bigger run with the mid-cycle redesign due to reach showrooms late in 2016.

Among other things, the Mokka now gets the “X” designation that Opel/Vauxhall will adopt for future ute models. It also picks up on the new brand design theme, including a wing-shaped front grille and double-wing LED running lights. That wing theme is also carried over in the taillamps.

Mokka X will add a new powertrain for 2016, a 1.4-liter gas package, and it gets the new Apple CarPlay and updated OnStar infotainment technology.

(SUVs and pickups rule at Chicago Auto Show – and across the US. Click Here for the story.)