Trucks Rule at Chicago Auto Show – and Across the U.S. 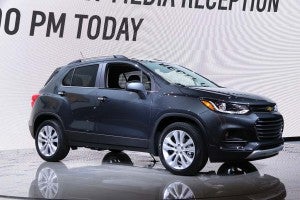 The Chevrolet Trax is one of the newest utes from GM, and sales are outstripping supply.

Chevrolet faces the sort of challenge most automakers can only dream of. Its various pickup plants are operating at full, three-shift capacity and can’t build any more trucks. If anything, says marketing executive Sandor Piszar, that means the bowtie brand is losing possible sales.

“The toughest part is keeping up with demand,” said Piszar, during a conversation at the 2016 Chicago Auto Show’s media preview. “We’re running flat out at all our plants.”

Actually, Chevy isn’t entirely unique. Hyundai is struggling to keep up with demand for utility vehicles like the Tucson, shifting capacity at its plant in Alabama to build more of the mid-range Santa Fe Sport. Ford, Toyota, Mercedes-Benz and Nissan, with rare exception, every automaker TheDetroitBureau.com spoke with is laying out plans to boost truck capacity and, in many cases, add more truck models.

(Live from Chicago! Click Here to check out all the new product and news from the Windy City auto show.)

In today’s market, the term, “truck,” is a somewhat nebulous one. It traditionally meant body-on-frame pickups and SUVs, like the Chevrolet Silverado and the Toyota Land Cruiser. Minivans also fell into the category, though they ride on more car-like unibody platforms. The definition has been stretched even further by including car-based crossovers, such as the Ford Escape and the Honda CR-V. Add some of the newest models, such as the Mercedes-Benz GLA, which stretch the definition to the extremes. 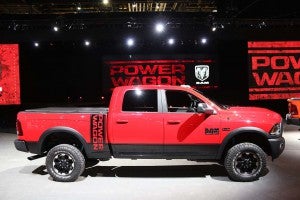 FCA wants to outsource some car models so it can boost production of CUV and pickups, like the new Ram Power Wagon.

However you define the term these days, light truck sales have been growing significantly faster than the overall U.S. market, which hit a record 17.5 million vehicles in 2015. Pickups, SUVs, vans and crossovers collectively accounted for about 58% of the market last year, according to industry data.

“The car share will eventually level off,” says Stephanie Brinley, a senior analyst with IHS Automotive, but at one point is uncertain. She expected that to happen when sedans, coupes, convertibles and sports cars dipped to just 42% in 2015. But when December’s sales were tallied up, trucks had nabbed a 60% share.

It certainly helps to have fuel prices down to a level Americans haven’t seen in a decade – with the possibility motorists may soon be paying less than $1 a gallon in some states. But “It’s way behind fuel prices,” contends Ford’s sales and marketing director Mark LaNeve. “Gas prices are just throwing fuel on the fire, so to speak.”

(Click Here for a look at Ram’s reborn Power Wagon.)

Industry research shows that motorists have fallen in love with the added functionality of trucks, especially utility vehicles. There’s the larger cargo capacity and the higher “command” seating. Almost all crossovers and classic SUVs offer weather-beating all-wheel-drive. And the basic dimensions of a utility vehicle translate into more room. A compact Ford Escape boasts the interior space of a midsize sedan. 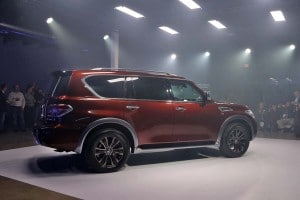 There’s also the fact that today’s trucks get significantly better fuel economy. The midsize Chevy Colorado Diesel pickup gets over 30 mpg, the fuel-size Ram 1500 EcoDiesel 29, and some versions of the gas-powered Ford F-150 aren’t far behind. The Honda HR-V crossover gets 34 mpg on the highway, compared with 37 for the similarly sized Fit hatchback. Some utility vehicles have reduced the mileage gap to barely 1 mpg.

As a result, industry planners think that only a 1970s-era fuel crisis would send American motorists scurrying back to conventional passenger cars. Even a doubling of current gas prices would be more likely to spur, “a shift from bigger utility vehicles to smaller ones, rather than away from utility vehicles,” said Ford’s LaNeve.

As a result, Ford is planning to add four new utes to its line-up in the next few years, the executive announced during a Chicago Auto Show speech. And Toyota Executive Vice President Bob Carter told TheDetroitBureau.com that the Japanese giant is considering new utility models, as well. Earlier this month, this site reported that Hyundai will add at least three, and possibly four, more utes. Two will be sold through the Korean carmaker’s new Genesis luxury brand. 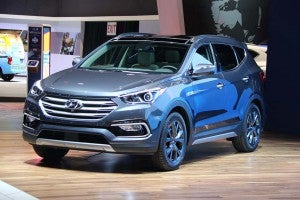 But the real surge is in sales of car-based crossovers, like this 2017 Hyundai Santa Fe Sport.

During his speech, LaNeve noted that the utility vehicle market is splintering. And industry executives interviewed in Chicago acknowledged they are looking for so-called “white space” opportunities to establish an advantage over the competition. In recent years, that has meant an onslaught of crossovers that don’t easily fall into existing categories and which often look like nothing ever seen on the roads before.

BMW jumped in with the coupe-like X6 Sport-Activity Vehicle. Mercedes with the GLA, a sort of sports car/sport-ute blend.

“Our goal is to compete aggressively in every segment, recognizing the shift taking place,” said Phil O’Connor, the head of the Nissan division in the U.S. In Chicago, the mainstream marque unveiled an all-new version of its big Armada, a classic, body-on-frame SUV. But at the stand of sibling brand Infiniti, the luxury maker is touting the hard-to-categorize QX30 crossover.

Kia, meanwhile, blew into the Windy City with its all-new Niro, a hybrid answer to the Toyota Prius. But rather than a classic sedan or hatchback body, the Koreans opted for a crossover design. Niro will come to market with a Prius-like gas-electric driveline and then, a year later, add a more advanced plug-in hybrid option.

(For a closer look at the Kia Niro, Click Here.) 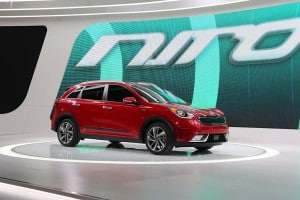 It won’t be unique for long. The surge in truck sales does pose a challenge for an industry facing strict new emissions and mileage standards. And that will require manufacturers to boost the efficiency of their pickups, SUVs and CUVs even more. Look for hybrid pickups from General Motors and Ford. Mercedes-Benz will soon add a plug-in version of its midsize GLE utility vehicle. And Audi is planning an all-electric e-tron Quattro SUV for 2018.

Automakers are bound and determined to keep the light truck boom going – all the more because consumers are typically willing to pay more for pickups, utes and crossovers than for traditional passenger cars. That’s translating into record industry earnings.

So, expect to see even more new trucks roll out in the months and years ahead as the industry feeds one of the biggest shifts in consumer demand it has seen in decades.