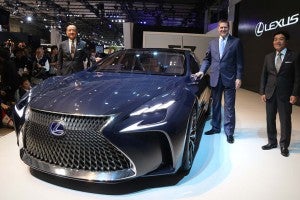 Lexus officials are expected to unveil the production version of the LF-LC concept shown in Tokyo last month in Detroit in January.

Driven by a mandate from Toyota CEO Akio Toyoda, Lexus officials have been trying to pump more “passion” into the brand with recent designs like the 2016 RX, and the all-new NX. But there’s only so far a company go with a two-box utility vehicle.

To push the design envelope to its limits, Lexus is expected to unveil the long-awaited production version of its LF-LC Concept coupe, the latest version of which made its debut at the Tokyo Motor Show barely a month ago. Dubbed the Lexus LC 500, the 2017 model should be ready to take the stage at the upcoming Detroit Auto Show – part of a flood of concepts and production models Toyota is set to be readying for the show.

“Look at this (concept) and you’ll get a real good idea of where we’re going with the styling direction of the brand,” the LS in particular, Mark Templin, a managing officer at Toyota and executive vice president of Lexus International, told TheDetroitBureau.com after the latest take on the LF-LC concept was revealed in Tokyo.

Like many luxury manufacturers, Lexus has often used its coupes to showcase the brand’s most emotional designs, dating back to the original SC line. But it drew more derision than kudos for the most recent SC, an awkward and largely forgotten hardtop convertible.

If, as Templin suggests, the recent LF-LC Concept really is an indication of what’s coming, Lexus is ready to make amends with a design that is far more elegant and contemporary. 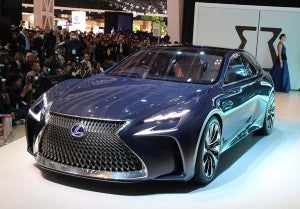 Expect to see the LF-FC strongly influence the design of the next-generation Lexus LS.

With its rear-drive layout, it features the latest take on the Lexus brand’s familiar spindle grille, framed by slit-like LED headlamps. A long hood flows into a steeply raked windshield. The roofline, in turn, wraps into a short, high rear deck.

Though some details were given the show car treatment in Tokyo, what we saw was largely what we’ll get at the North American International Auto Show next month.

Insiders at Toyota say the vehicle was approved for production in 2013, but some questions remain. Among other things, the SC name could be used for the final production version of the 2+2, though Lexus has filed for copyright protection for both “LC 500” and “LC 500h.”

(Click Here for details about Lexus attempt to get back on top of the luxury sales heap in the U.S.)

The latter, of course, suggests that there will be a hybrid, as well as a more conventionally powered version of the sports coupe – no surprise, as Lexus is trying to put more emphasis on performance with its gas-electric drivelines, a move we’re seeing across the luxury segment. 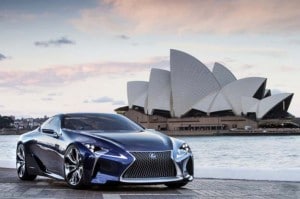 Ever-resourceful Peter Lyons reports the LC will get a 3.5-liter V-6-based hybrid system making as much as 470 horsepower. That is not the same gas-electric driveline as in the current Lexus GS 450h, apparently.

The system would combine a 306-hp V-6 with electric motors making 217 ponies. Because the two sources reach peak at different times, the combined driveline is expected to deliver about 470 hp. The hybrid side, meanwhile, adopts some of the changes we saw – albeit in much more powerful form – on the 2016 Toyota Prius. That will mean lighter, more powerful batteries and more compact motors and electronics.

The primary motivator will be a 5.0-liter V-8, a version of the big grunter currently in use in the RC F and GS F models. Significantly, Lexus could jump rivals Ford and General Motors who, in partnership, are also developing a 10-speed automatic gearbox, it seems. Don’t be surprised to see a 600 hp LC F model to follow, as well as the brand’s tweener F Sport.

If rumors are to be believed, the Lexus 2018 LC F would use twin electric turbochargers, an intriguing innovation that a number of other makers are reportedly working on. This approach uses electric motors, rather than exhaust gases, to spin up the turbos, eliminating that dread off-the-line turbo lag.

Word has it the new Lexus LC will make extensive use of lightweight materials, including aluminum and, possibly, some carbon fiber. That could make it one of the lighter models in its segment – something we hope to find out in a little more than a month.