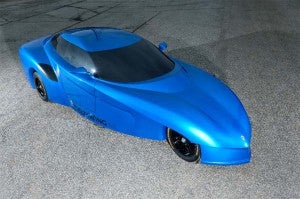 The DeltaWing GT's extreme design would help it achieve a wind-cheating 0.26 drag coefficient.

The radical, dart-shaped DeltaWing race car has come “one step closer” to going street legal, the Georgia-based DeltaWing Technology Group says, with the unveiling of its DeltaWing GT Concept.

The highly aerodynamic design, based on the company’s Le Mans race car, would serve as the basis for a road-going, two-seat GT car. And DeltaWing hopes to follow it with a four-door sedan version, as well, it previously indicated.

“Real-world testing” is set to begin before the end of this year, DeltaWing announced in a statement, though its didn’t lay out production plans. The wind-cheating design and lightweight, spaceframe chassis would allow the GT to deliver sports car performance while still getting up to 74 miles per gallon, DeltaWing has estimated.

First seen on track during the 2012 running of the Le Mans endurance race, the concept behind the distinctive-looking DeltaWing focuses on light weight and advanced aerodynamics rather than massive amounts of horsepower.

(GM redefines itself as a “”personal mobility company.” Click Here to see what that means.”

Backed by Don Panoz, the Georgia-based entrepreneur and race team owner, DeltaWing Technology Group says preliminary testing shows it could deliver sporty performance – and more than 70 miles per gallon in a street car. If that were to hold up with a production model, it would rival the best of today’s hybrids and even more advanced plug-in hybrid vehicles.

“This is an important point in the DeltaWing project’s next phase,” said the 80-year-old Panoz, who serves as the company’s chairman and CEO, when an earlier street car prototype was unveiled last March. 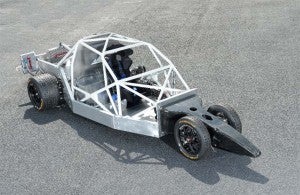 The ultimate goal is to produce both a sporty GT model and a more mainstream four-seater.

The unusual design, which wraps around a lightweight spaceframe “architecture “can accept virtually any current or future transverse engine powertrain and deliver significant fuel savings and green benefits when compared to traditional vehicle designs,” the company claims.

It adds that, “The DeltaWing platform also can be fitted with all-electric or hybrid powertrains; today’s smaller and lighter high-efficiency gas, diesel and compressed natural gas (CNG) engines.”

At least initially, the development program, led by engineering chief and racing veteran Brian Willis, has focused on a 1.4-liter, 138-horsepower four-cylinder gas engine. A preliminary analysis done by Meszler Engineering Services indicated an unadjusted EPA fuel economy rating of about 74 mpg Highway and 57 mpg in the Combined city/highway test.

That would put it well above the 54.5 mph target the EPA has set for the U.S. market in 2025 and would conceivably make it the most fuel-efficient gasoline vehicle on the road today. Only the three-wheeled Elio – which uses an equally radical shape and just three wheels – is targeting higher numbers.

Earlier this year, DeltaWing said it would cost about $60,000 for its two-seat, high-performance track model, the 350-horsepower GT. But it wants to bring the driveway-ready four-seater in for something closer to $30,000.

While the company says it is moving ahead rapidly on the project it hasn’t set a timetable for getting the DeltaWing on the road. Among other things, it still has to decide whether it will build the car itself or try to find a partner.