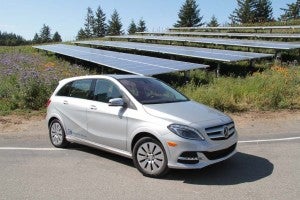 The list of manufacturers hoping to tackle Tesla with an extended-range battery car has just grown longer, and Mercedes-Benz apparently has more than one model in mind as it tries to outgun the upstart California carmaker.

Along with an assortment of plug-in hybrids, Mercedes’ R&D chief says it is developing a modular platform that, in at least one model, should deliver up to 500 kilometers, or about 312 miles, per charge. Among other makers looking to push into Tesla territory are Audi, BMW, General Motors and Nissan.

“We are working on an intelligent concept for a highly attractive electric vehicle with a range of (anywhere from 228 to 312 miles),” Research and Development board director Thomas Weber told the magazine Auto Motor und Sport.

Weber did not say what type of vehicle Mercedes is working on, but the modular platform is clearly designed to allow the German maker to use it for more than one model. The first, he suggested, will be coming to market “soon,” which could mean anywhere from the coming model-year to the latter part of the decade. 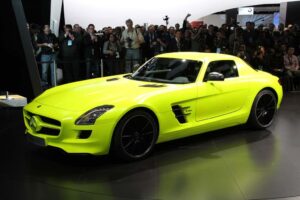 The battery-powered version of the Mercedes-Benz SLS AMG supercar, the SLS E-Cell.

Though Mercedes might first go after the now-familiar Tesla Model S, the betting seems to favor a utility vehicle of some sort. One reason is the extra space that could provide to tuck away the additional batteries needed to deliver range of as much as 300 miles. Tesla, in fact, is just getting to that bogey with one of its latest Model S variants, the P90d, which will use 90 kilowatt-hours of lithium-ion batteries.

Going with a unique platform provides a manufacturer some advantages when compared to converting an existing vehicle to run on batteries. A key plus is being able to design the platform specially around the unique components that go into an electric vehicle. The Model S, for example, has its batteries neatly tucked beneath the passenger compartment, which doesn’t compromise passenger or cargo space.

BMW is apparently considering the same approach. As TheDetroitBureau.com recently reported, it is developing a new battery-electric utility vehicle for its i sub-brand. But the Bavarian maker may also modify its upcoming BMW X9 utility vehicle for battery power.

(For more on BMW’s push into battery power, Click Here.)

Nissan already has a dedicated EV in the form of its Leaf model. The next-generation electric vehicle will squeeze out more range – by some reports as much as 200 miles a charge – by adding a little more space for its pack and by using next-generation batteries that are more energy-dense.

Packing more energy into a smaller package will allow GM to boost the range of its second-gen Chevrolet Volt plug-in by 40%, while also delivering 200 miles per charge out of a pure-electric model Chevy will launch late next year, the Bolt.

And Audi is also working on several longer-range electric models, as well as a high-performance two-seater based on its R8 sports car.

Luxury makers are particularly interested in battery-electric models because they will need the technology to meet new zero-emissions rules, particularly in California. But they’re also working up an array of plug-in hybrids that, the betting goes, will be an easier sell to a public used to the freedom and flexibility gasoline power provides.

Daimler AG, which spent roughly half of its $6.4 billion R&D budget on low-emissions and alternative powertrain technology last year, has said it will bring 10 PHEVs to market by 2010. BMW isn’t far behind. It will start it with a plug-based version of its X5, followed by the all-new 7-Series and then an array of additional models.