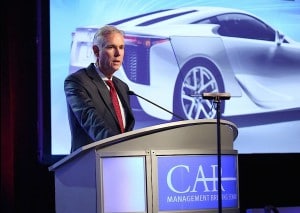 Aiming to improve the showroom experience, Lexus and a dozen of its dealers will try out a new, “no haggle” pricing policy – a move they admit could please some shoppers but send other potential buyers scurrying away.

The experiment, announced during an industry event in Traverse City, Michigan, would mark the first formal adoption of a fixed price approach since General Motors abandoned its Saturn brand during its bankruptcy six years ago.

Bargaining has long been a way of life for auto dealers, all the more so in a hotly competitive market like today. But studies show that while some shoppers love the opportunity to drive a good bargain, others hate the haggling and would prefer a less confrontational showroom experience.

That worked for Saturn which developed a loyal following largely based on its dealer experience, and during his speech at the annual Management Briefing Seminars, Bracken pointed to a successful Toyota dealer who has used a fixed-price policy for the last dozen years.

“So, we know it can be done, even in a highly competitive market.”

The idea of going to a no-haggle approach has been under discussion at Lexus, currently the top-selling luxury brand in the U.S., since 2013, The maker has identified a dozen, hand-picked dealers who will launch the pilot program during the first quarter of 2016.

If it proves successful, Lexus hopes to see the approach expand in 2017, though he cautioned that it won’t become a set policy for the brand. Some of the nation’s 236 Lexus dealers will likely continue to bargain.

(Lexus shows off a working hoverboard. For more, Click Here.)

At a time when new vehicle quality is better than ever, automakers have been struggling to find ways to enhance the appeal of their brands, and the dealer experience is considered critical.

The most successful dealers, notes consultant Fran O’Hagan, not only have friendly, knowledgeable sales people, but they also know how to take the extra steps to ensure a sale. Satisfied shoppers are more likely to turn into buyers, he said, something backed up by the annual research he conducts. The so-called Pied Piper Satisfaction Index shows a direct correlation between dealer experience and sales.

Lexus came in a close third in the latest study, behind only Mercedes-Benz, the perennial leader, and Nissan’s Infiniti brand.

That has helped the maker take the lead in the luxury segment, at least for the moment, away from German rivals Mercedes-Benz and BMW. Lexus has targeted sales of 340,000 vehicles this year and is actually running slightly ahead of that pace.

Product has been the other key for the brand’s surge. Lexus has been putting more of an emphasis on design and performance than in years past, reflecting concerns that its vehicles were long too much plain vanilla. Its F Sport sub-brand, in particular, has been drawing in the younger buyers that long steered clear of Lexus showrooms.

Lexus also has scored with new models like the sporty RC coupe and the compact NX crossover. Now it is looking at opportunities at the top end. Following his speech in Traverse City, Lexus General Manager Bracken told the Reuters news service that the maker is considering adding a second flagship that would be sold alongside the current full-size halo car, the LS.

“We need a flagship. It doesn’t have to be a sedan,” said Bracken, though he declined to say what Lexus is working on.