Superconducting "cryostats" allow board to float around a "hoverpark." 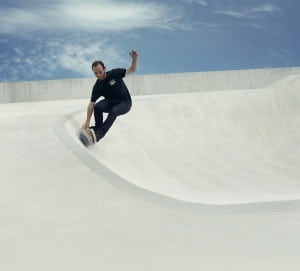 Skateboarder Ross McGouran shows off the capabilities of the prototype hoverboard.

Lexus is, quite literally, going Back to the Future, showing off a working version of the levitating skateboard actor Michael J. Fox’s character got to ride in the 1989 sci-fi adventure.

But don’t race to your local sports shop to try to buy one. The Toyota luxury brand isn’t ready to bring the concept to market. And even if it does one day, you’ll need a specially equipped skatepark to use the new hoverboard.

“I’ve spent 20 years skateboarding, but without friction it feels like I’ve had to learn a whole new skill, particularly in the stance and balance in order to ride the hoverboard. It’s a whole new experience,” said pro skateboarder and hoverboard test rider Ross McGouran.

Lexus first showed off the hoverboard in static form earlier this year. Now, in a two-minute video, dubbed “amazing in Motion,” you can see McGouran actually test it out at a specially constructed park in Barcelona.

To make the hoverboard float just inches above the ground, researchers installed more than 650 feet of special magnetic track underneath the surface of the “hoverpark.” The board itself is fitted with two so-called “cryostats,” a device which uses liquid nitrogen, cooled to -197 degrees Fahrenheit, to create a superconducting magnet. 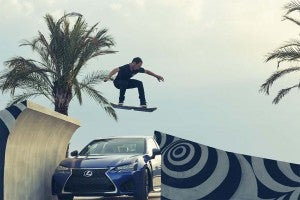 “The magnetic field from the track is effectively ‘frozen’ into the superconductors in the board, maintaining the distance between the board and the track―essentially keeping the board hovering,” explains Oliver de Hass, CEO of evico, a subsidiary of Dresden’s Leibniz-Institute for Solid State and Materials Research. “This force is strong enough to allow the rider to stand and even jump on the board.”

The technology is similar, in many ways, to what is being used in MagLev, or magnetic levitating, trains, such as one that links the Shanghai airport with the center of that booming Chinese city. That train reaches a top speed of 268 mph. The hoverboard doesn’t quite come close, relying on foot power and gravity to help it move.

Even then, “We discovered making a hoverboard isn’t an easy process, said Mark Templin, global head of Lexus. “We’ve experienced the highs and lows and have overcome a few challenges, but through mutual determination we have created a demonstration of our philosophy in design and technology to create (a system that actually works).” 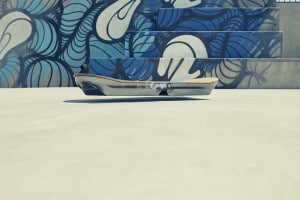 Whether by coincidence or not, actor Fox discovered the hoverboard in 2015 when he went forward in time in the sequel film, Back to the Future 2. It was a natural for his character, Marty McFly, who also discovered self-lacing sneakers.

While it’s anyone’s guess whether the hoverboard will make it out of the lab one day, Sports gear manufacturer Nike plans to introduce sneakers with “power laces” later this year. They’ve been developed by Tinker Hatfield, who came up with the Nike MAG sneaker McFly’s son wore in Back to the Future 2.