Maker expects sales to normalize this fall after production hiccup. 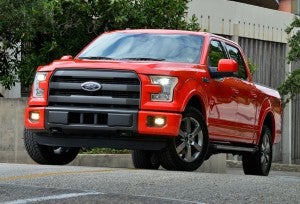 Sales of the aluminum F-150 are down 2.4% for the first half of 2015, but are expected to improve now some production issues have been resolved.

The scrutiny over Ford’s new aluminum-intensive F-150 hit a fever pitch this week over incentive offerings reaching as high as $10,000 per truck: a frenzy upon further reflection with no real substance.

Reports chronicling discounts on the much-hyped truck were tied to sales figures that saw the country’s best-selling vehicle were down 2.4% for the first half of the year, including 8.9% in June, causing many to wonder if Ford was facing it’s nightmare scenario: truck buyers had no faith in an aluminum truck.

Smelling blood in the water, Chevrolet did its level best gain sales with a series of web-based ads, including one with former NFL lineman Howie Long, highlighting some of the potential problems that come with using aluminum.

In the ad, the former Pro Bowl defensive tackle speaks with a GM engineer about some of the problems aluminum use presents, including that repairs cost more and take longer, meaning owners who rely on that truck to make their living will have costs beyond the repairs because they will be without the vehicle longer than if they had a conventional steel-laden truck, like the Silverado.

Chevy officials downplayed antagonistic nature of the ads, saying they were simply a way to get out the brand’s “story.” Silverado and Ram truck sales have benefitted from F-150 problems. Silverado sales jumped 18% last month, and Ram sales rose 0.6% and 4.3% in the first half.

However, a look behind the curtain reveals that things are not nearly as bad as it may seem. The discounts were on Ford’s website, and vary by region. The highest discounts were found in places like Washington, D.C., which is not a big truck market. However, other places like California saw discounts as high as $7,000, although they were tied to Ford’s high-end pickups.

The packages also include rebates that are available to any new Ford buyer, such as $750 off for financing through Ford Credit, or $2,500 back in bonus cash, according to Ford officials. The average F-Series incentive was $3,100 per truck, Ford said, which lower than the industry average and about $600 less than what Ford offered this time last year on the previous-generation truck.

The trucks turn in average of 32 days, which is faster than its competitors in the segment. Average transaction prices are $44,100, the highest in the half-ton pickup segment and a record for the company. Ford officials note they only have half as many new trucks in their inventory as they normally would at this time.

In short: they’re selling the trucks faster using lower incentives and for more money than the competition. So why are they selling fewer of them? Well, it’s a matter of production constraints.

(Which are America’s highest-quality pickups? Click Here to see who ranked highest in the latest JD Power study.)

In May, Ford cut weekend shifts at its Dearborn Truck and Kansas City Assembly plants because the supplier they use for the frames, Metalsa, was unable to meet the demand. Ford made no mention of the problem so in spite of the fact that you can build trucks without frames, it appeared to some that there was a demand problem. However, the problem has been resolved and frame supplies will be back to normal this fall.