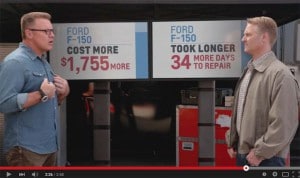 General Motors is amping up its attack on Ford’s highly touted, aluminum-intensive F-150 in a bid to gain dominance in the hugely profitable full-size pickup segment.

The YouTube web spots – which may soon turn into a network TV campaign – rely on a 700-pound bear, a fake superhero and NFL broadcaster Howie Long in a bid to portray Ford’s new truck as too costly for the average owner to maintain.

The stakes are huge. Full-size pickups are some of the most profitable vehicles in the industry. Ford has long dominated the segment with its F-Series line-up, but some analysts say it may be vulnerable in the wake of the switch from steel to aluminum for the 2015 model-year.

The goal was to attack Ford “in a fun way,” said GM spokesman Tom Wilkinson, who added the campaign is aimed at “telling our story.”

Ford has been riding a wave of media attention to tell its own tale ever since it first pulled the covers off the all-new F-150 at the January 2014 Detroit Auto Show. By switching to aluminum, it noted, it shed as much as 700 pounds compared to the older, steel pickup – though the gap is narrower compared to competitors like the Chevrolet Silverado, GMC Sierra and Fiat Chrysler’s Ram 1500. 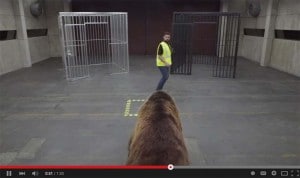 A second ad shows men dashing for the steel, rather than aluminum cage when a bear attacks.

Ford has gone to great lengths to downplay concerns about repair challenges and costs. But the new GM campaign claims it not only costs $1,755 more for a Ford owner to make a typical repair after an accident, but that it also take 34 more days to get the F-150 back from the shop.

“So if I’m a guy that uses my truck for work, every day I don’t have that truck, that costs me money,” Long says in one of the ads. “In addition, you got higher repair bills. I’d be interested to know what happens to insurance costs. I got to tell you — all that certainly makes me think twice about an aluminum-bodied truck. Seems like you’d be taking a risk.”

In another spot, men are placed in an empty room with two metal cages, one steel, the other aluminum. When a 700-pound grizzly bear charges in, they instinctively race to the steel cage.

The third ad shows a panel of comic book fans turning thumbs down on the idea for a new superhero: the Almighty Aluminum Man. 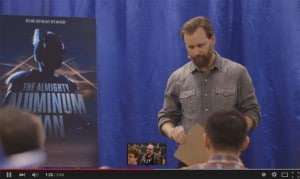 It’s not the first time Ford and GM have had a dust up. In fact, they’ve long taken aggressive potshots at one another’s trucks, including a Chevy Super Bowl ad of a few years back that led Ford to issue a cease-and-desist letter.

(Which are America’s highest-quality pickups? Click Here to see who ranked highest in the latest JD Power study.)

The two makers overwhelmingly dominate the pickup truck market, though Ram has gained ground over the last two decades by emphasizing a mix of design and capabilities. It has also scored with a new high-efficiency diesel that it quickly points out delivers even better mileage than the new aluminum F-150.

The battle for pickup primacy could get even nastier in the coming years. After largely landing with a thud, both Nissan and Toyota are planning to launch all new versions of their own full-size pickups. The next-generation Nissan Titan, due out for the 2016 model-year, has also been the subject of an ongoing web media campaign that, among other things, focuses on the benefits of its new high-power, high-mileage diesel.

Toyota has yet to talk about what it has in store for the next-generation Tundra pickup but few expect the Japanese giant to launch it quietly. Whether it will turn to a superhero, a bear or a former football store remains to be seen.