Long popular red - shown here on a Chevrolet Corvette Z06 - has lost some of its luster.

One only has to follow fashion to know that men and women typically have very different tastes when it comes to colors. But while guys might tend towards more subdued shades when it comes to the clothes they wear, they’re much more open than women to bright, bold and flashy colors for the vehicles they buy.

A new study finds that orange, brown and yellow are the colors men have developed a strong preference for over the last year. Women, on the other hand, remain wedded to traditional gold, silver and beige.

“These study results could suggest that women are more practical in their choices. For the most part, they may just want to buy a reasonably priced car that safely drives them around,” said Phong Ly, co-founder of the used vehicle website iSeeCars. “On the other hand, for men, perhaps they may be a bit more idealistic about cars, preferring something that has speed and is fun to drive.”

To come up with its color trend study, the website looked at 30 million used vehicle listing, while also analyzing the requests that shoppers made. The results were then broken down by gender.

There have traditionally been some strong differences in color choices. Men have long favored red and black, colors normally associated with the high-performance sports and muscle cars they’re far more likely to purchase. Surprisingly, both of those hues fell in popularity this past year, however, from first and third among men to fourth and fifth, respectively. 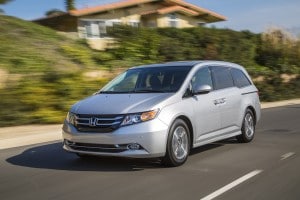 Silver -- as seen on a Honda Odyssey -- remains a favorite shade for somen buyers.

Even with the muscle car segment growing rapidly, men turned to orange which gained 73.3% in popularity while red dipped by nearly a third.

Orange led the color choices among men, followed by brown and yellow. But men favored a wide palette of nine colors, according to the iSeeCars study.

By comparison, women showed a strong preference for only three hues: gold leading the way, followed by silver and beige.

That’s in keeping with studies by the top paint suppliers, such as BASF and DuPont, who have found various silver shades one of the perennial leaders in the new car market. But there has been growing demand for more vibrant shades, whether oranges, gold or blues.

While blue is not one of their top choices overall, it’s gained traction among women minivan buyers, the study found.

Color choices often come closely linked to the type of car a shopper picks, whatever their gender. Red and black – and now orange – are wildly popular for sports cars, pickups and sporty coupes.

Silver is a favorite shade for sedans, wagons and minivans.

(For the first official look at the 2016 Chevrolet Camaro, Click Here.)