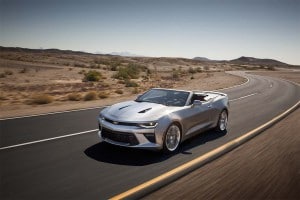 Chevrolet officially took the wraps off its new edition to the 2016 Camaro line-up: the convertible.

With most vehicles it might be almost anticlimactic, but most fans are likely to make an exception here. Just two days after undisguised pics of the ragtop leaked out onto the Web, Chevrolet has now made it official, pulling the covers off the 2016 Camaro Convertible.

No surprise, the cabriolet retains most of the distinctive lines that earned the Camaro Coupe rave reviews when it debuted two months ago. The new softtop is no longer the classic Rube Goldberg affair, meanwhile, but the same sort of slick origami that we find on most modern European convertibles, allowing a motorist to drop the top at speeds up to 30 mph – or operate it remotely from the keyfob.

And, as with the Camaro Coupe, the new convertible is lighter and more aerodynamic, Chevy suggesting it has cut mass by about 200 pounds while still delivering a stiffer body structure.

“From the beginning, the Camaro’s architecture was developed to incorporate a convertible with uncompromised driving dynamics,” said Camaro Chief Engineer Al Oppenheiser. “Customers will appreciate what they don’t feel: quivers, cowl shake or an under-damped chassis typically found in a four-seat convertible.” 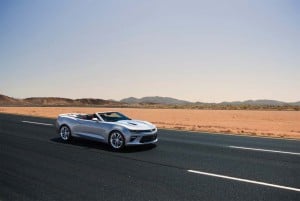 The new Camaro convertible is expected to show up in dealership lots early next year.

Chevy won kudos for the coupe, but needed to hit one out of the park with the convertible as well. It overwhelmed Camaro’s primary competitor, the Ford Mustang, for five straight years, but the cross-town rivalry heated up when an all-new model propelled Mustang back into the sales lead this year.

At last month’s debut of the 2016 Chevrolet Camaro Coupe, General Motors’ global product czar, Mark Reuss, said the goal for designers was “making it look like a car for tomorrow, rather than a car for yesterday.” That said, no one will have a hard time telling that this is a Camaro from first sighting.

(Leaked photos give some an early look at the new Camaro convertible. For more, Click Here.)

The visual redesign is only a part of the dramatic changes the 2016 Camaro has undergone. The new model now shares the same basic platform as the well-reviewed Cadillac ATS sedan and coupe models. At 188.3 inches, it is about two inches shorter than the old Camaro, its 110.7-inch wheelbase shrinking by 1.6 inches.

Both coupe and convertible shed about 200 pounds of weight for comparable models, in part, due to the increased use of aluminum for such parts as the hood and windshield frame.

The Camaro Convertible also makes use of the same powertrain lineup as the Coupe, with the nameplate’s first turbocharged four-cylinder engine, as well as a 3.6-liter V6, and a 6.2-liter V8 with six-speed manuals or eight-speed automatic transmissions spanning the line-up. 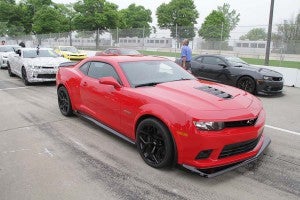 General Motors is hoping to regain the top sales spot in the pony car segment with the 2016 Camaro.

In the pony car sales wars, it’s that extra tenth of a second that often makes the difference, but Chevy is betting it also can build momentum with some of the other changes it has made. The interior is far more refined than the outgoing Camaro, and it’s loaded with new technology, including available 4G LTE WiFi and both Apple CarPlay and Google’s Android Auto.

The convertible roof, meanwhile, should also boost the Camaro’s appeal. Ford also improved the droptop version of the Mustang but there’s still a lever that must be released before it can fold out of sight. And you can’t remotely open up the Mustang’s softtop. The Camaro, meanwhile, automatically deploys a hard tonneau when the operation is complete, giving the vehicle a more refined look.

Incidentally, Chevrolet notes that when the original Camaro convertible was introduced back in 1967, it was an entirely mechanical affair. You could opt for a power top for an extra $52.70 – something 45% of buyers chose.

As to timing, Chevy fans will have to wait. The maker says it won’t roll the 2016 Camaro Convertible into showrooms until “early 2016.” Ford officials might sigh a note of relief at that reprieve.