What Gets Your Road Rage Roaring? 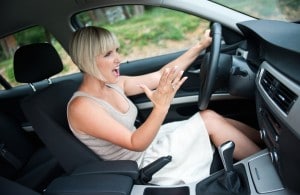 Texting while driving is the action most likely to inspire road rage in other drivers, according to GfK.

We’ve all had one of those moments, cruising down the road and running up on another driver whose behavior gets us grinding our teeth. But what are the most infuriating behaviors likely to set off a bout of road rage?

Texters top the list, according to a study of 1,000 American motorists by GfK, with tailgaters and “left lane hogs” close behind. The researchers also looked at the sort of in-car behavior likely to set us into a rage, and found that the familiar back-seat driver tops the list.

The study also found that New York City drivers are considered the country’s rudest, with motorists in Los Angeles coming in a distant second.

“Fifty-one percent of Americans report that they loathe sharing the road with bad drivers, more than cyclists, buses, taxis, joggers and walkers combined,” noted an analysis of the report by Expedia, the travel site that commissioned the study. “Nearly all Americans (97%) rate themselves as ‘careful’ drivers, but feel that only 29% of fellow drivers merit the description.”

If you’ve ever gotten stuck behind a texter weaving down the road or not noticing that the stoplight has turned green, you’re likely to agree with the study’s findings. Texters were listed number one by 26%, with tailgaters cited by a mere 13% as the top cause of road rage. Left Lane Hogs got the nod from 12% of those surveyed, with “Crawlers” at 10%, and “Multitaskers at 7%.”

When it comes to frustrating behavior inside a vehicle, back-seat driving was named the top peeve of 52% of those surveyed. The polar opposite, the co-pilot who won’t help navigate, was a far distant second, at 12%. The “Radio Hog” was named by 10% of the respondents, followed by “the Shoe Remover,” at 7%, and the “Snacker,” at 6%.

Perhaps not surprising, the majority of the drivers pointed to the other guy as the source of road rage, almost all Americans insisting they were “careful” drivers.

That said, a full 61% admitted to speeding, while 29% acknowledged a tendency to tailgate. And more than one in four admitted using profane language or gestures to express their frustration with another driver. On the other hand, more than half of the motorists surveyed said they’ve been on the receiving end.

(Click Here for details about GM’s $1 billion investment in its technical center.)

Why such bad behavior? One in five motorists blamed being late while 14% said they were provoked by the other driver. Four percent of Americans have gone so far as to exit their vehicles to confront another motorist, according to GfK.

Asked where those rude drivers are most likely to be found, 42% pointed to New York City, 32% to Los Angeles, and 18% to Washington, D.C. Apparently, drivers in Portland, Oregon maintain the calm and cool behavior the city is known for, only 1% named the city as the country’s rudest.

(To see more about why women are driving more miles than ever, Click Here.)

There is a positive side to the Expedia road rage study which found 40% of Americans say they have stopped at one point or another to help a fellow driver in distress.