Women Driving More Miles than Ever in US 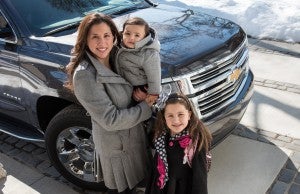 Women are having a bigger impact on the auto industry than ever, including Jessica Moreno, a GM program manager, who is working on V2V technology.

The term “soccer mom” came into vogue during the 1996 presidential election, but the symbolic vehicle of choice for them – the minivan – is logging more miles than ever as women are spending more time behind the wheel, according to a recent University of Michigan study.

Women drivers accounted for 40.8% of the miles driven – 1.21 trillion miles – in the U.S. in 2013, according to a study from Michael Sivak with U-M’s Transportation Research Institute. In terms of the sheer numbers, women also are the majority making up 50.5% of all drivers on the road at any given moment: 105.7 million women have a driver’s license, compared with 104.3 million men.

The study tracked numbers starting in 1963 when women accounted 39.6% of all drivers, but they drove just 23.8% of the miles. The numbers have grown steadily during the five decades that followed.

Overall, the impact of women on the auto industry has been increasing during those decades, including vehicle ownership. Last year, women accounted for 4.8 million new vehicle registrations, or 40% of the market, according to registration data collected by IHS Automotive. That was up from 2.8 million, or 37% of the market, five years earlier.

“The observed gender trends in driver licensing will likely have major implications on the extent and nature of vehicle demand, energy consumption, and road safety,” Sivak said in the report. “This is the case because, compared to males, females are more likely to purchase smaller, safer, and more-fuel efficient vehicles; females drive less; and females tend to have a lower fatality rate per distance driven.”

The report confirms what many have observed for some time: women are important cogs in the automotive machine. Perhaps most importantly, they have a huge impact on the decision making process when it comes to buying or leasing a vehicle. Several studies suggest that women influence as much as 85% of all auto purchases.

Other interesting statistics about the perceived roles of men and women during the auto buying process, including:

Automakers and dealers have also been paying attention and gearing advertising toward women or to at least be inclusive of women. All told, women have full or partial say over a staggering $80 billion worth of spending on cars, according to Forbes, and that number rises to $200 billion if you include repairs and maintenance.