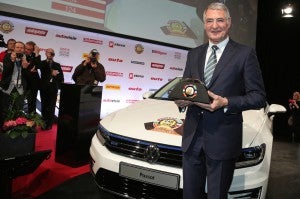 The Volkswagen Passat captured the 2015 European Car of the Year award at the Geneva Motor Show.

If Volkswagen can rack up sales this year like it’s racking up awards, they could set records. The German maker nabbed another honor when European auto editors named the Passat was named 2015 European Car of the Year at the Geneva Motor Show.

The large sedan beat out six other finalists including the Citroen C4 Cactus, Renault Twingo, Mercedes C-Class, Ford Mondeo, Nissan Qashqai and BMW 2-Series Active Tourer. The Passat succeeds the Peugeot 308 compact, which took the crown from Volkswagen’s Golf in 2013.

The North American Car of the Year award actually recognized the entire Golf “family,” which includes not only the standard Golf, but the diesel version and the sporty GTI, among others. And that line-up, noted Horn, will get bigger with the addition of the e-, or battery-electric, Golf, and a high-performance Golf R. 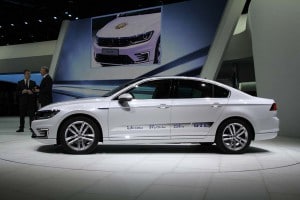 The European press went for the bigger vehicle in VW's line-up for it's car of the year while the U.S. media, ironically, picked the smaller Golf.

The Passat is a worthy winner, especially with an updated collision avoidance system, emergency driver assistance and cross-wind stabilization.

(Volkswagen pulls the wraps off the new Sport Coupe Concept in Geneva. For more, Click Here.)

The European Car of the Year award was selected from a vote by 58 journalists representing 22 countries in Europe, who test-drive the vehicles and then vote for the winner.

(Click Here for details about Volkswagen posting a 20% profit increase.)

“It is truly impressive that Volkswagen managed to win the title for the third time in six years,” Hakan Matson, chair of the judging panel and car expert at the Swedish business newspaper Dagens Industri, said in a release.

(To see more about the VW Golf family capturing the North American Car of the Year, Click Here.)

“The Passat has many strong points, including its design, overall quality, safety, spacious interior, and several useful innovations such as the Trailer Assist. With all these features the model clearly deserves to be Car of the Year 2015.”