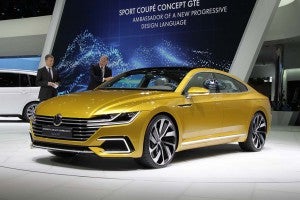 Volkswagen has long opted for a simple, straightforward and unadorned styling language, but with the launch of its new Sport Coupe Concept GTE at the Geneva Motor Show, the German maker is sending a clear message about how it plans to shift design direction.

With its crisp creases and curvaceous roofline, VW suggests it has “visibly sharpened” its look – while giving a very clear hint of its plans for what is expected to be the replacement of its outgoing CC model.

What’s under the new skin is also intended to show a shift in direction for the Volkswagen brand. The GTE badge has been reserved for battery-based models and, with the Sport Coupe Concept, VW has gone with a plug-in hybrid system that can deliver high-performance thrills while still minimizing its environmental impact.

“The Sport Coupé Concept GTE is another milestone of expressive design,” said Klaus Bischoff, Head of Design for the Volkswagen Brand. “With this concept car, Volkswagen is not only showing a new model’s design, but also initial glimpses of a new design era.” 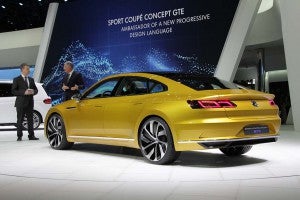 With its crisp creases and curvaceous roofline, VW suggests it has “visibly sharpened” its look.

The Sport Coupe Concept GTE adopts a squat and dynamic coupe-hatchback shape, with an entirely new take on the classic Volkswagen front end. It features a broad grille whose slats turn upward, much like the winglets on a jet, to frame LED headlights, daytime running lamps and accent lights that frame the lower air intakes – the latter becoming a signature for VW’s hybrid and battery-car models.

From the side, the Concept adapts a flattened curve roofline meant to emphasize its width and muscularity, VW explains. The low-set C-pillar dominates the design. Side air vents feature chrome accents that mirror the winglet look of the grille. A rear spoiler helps extend the visual length of the Sport Coupe Concept.

Inside, the prototype instrument cluster adopts a virtual 3D appearance using VW’s Active Info Display concept. The 12.3-inch screen is designed to flow seamlessly into rest of the instrument panel. In normal mode, two round gauges appear to float in space, though the display changes depending upon the mode the driver selects.

There’s a second display, this one measuring 10.1 inches, atop the center stack, to operate climate control and other vehicle functions. Rear passengers get their own 12.3-inch touchscreen. 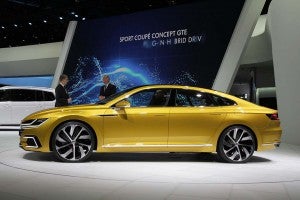 From the side, the Concept adapts a flattened curve roofline meant to emphasize its width and muscularity.

Meanwhile, VW has added the ability to link the driver and car at an almost subliminal level. “Based on the driver’s biometric data,” the maker explains, “the Sport Coupé Concept GTE determines, via a smartwatch or armband for measuring the driver’s vital functions, whether to select a route that includes an exciting country road or a gentle route instead.”

The driver can check out views of the recommended routes – along with information on weather, traffic and road conditions – to determine which one to take. A vehicle-to-vehicle communications system also can keep the driver informed of changing conditions along the way. 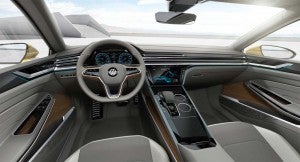 (Click Here for details about TDB’s first drive in the 2015 Volkswagen Golf R.)

The emphasis on high technology continues with the use of the plug-in hybrid drive system. It pairs a 3.0-liter direct injection TSI V-6 with a pair of electric motors, one driving the rear axle. Total available power comes to 374 hp. The system uses what VW calls “an electric driveshaft.” In fact, there is no mechanical link between front and rear wheels. But the system’s rear motor allows it to function as if it were in all-wheel-drive mode when driving and road conditions demand.

The coupe can launch from 0 to 100 kmh, or 62.5 mph, in 5.0 seconds, with a top speed of 155 mph. VW claims fuel economy of 118 mpg – though that’s using the European test cycle, so the American numbers would likely be closer to 90 MPGe. Meanwhile, the Sport Coupe Concept GTE can deliver 50 km, or about 32 miles, on battery power alone.

(To see more about the debut of the Lamborghini Aventador LP 750-4 Superveloce, Click Here.)

While some of the more exotic technologies, such as the biometric feedback system, aren’t likely to see production anytime soon, VW insiders hint the basic new design language of the Sport Coupe Concept GTE likely will make it to production when the Volkswagen CC is replaced around 2017.