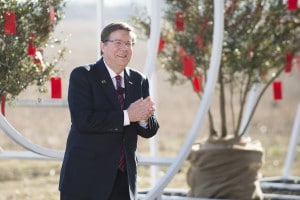 Toyota is making some big changes to its senior management, and while most of the moves focus on the critical North American market, the world’s largest automaker also plans to shatter Japan’s glass ceiling by promoting Julie Hamp to run its global public relations efforts.

The appointments come at a time when Toyota is making other big changes, including the move of its North American headquarters from California to a sprawling new campus in Plano, Texas.

“Bringing together an experienced and diverse team of executives with fresh perspectives, unique regional insights and a global mindset will help us better serve customers around the world,” said Toyota Motor Corp. Pres. Akio Toyoda, in a prepared statement.

Among the most significant changes, Jim Lentz, currently the CEO of Toyota’s North American region, becomes the new president of Toyota Motor Engineering & Manufacturing North America. The move gives him authority over the vast R&D operations Toyota has set up in the region, as well as its network of more than a dozen assembly lines and component plants.

And it comes at time when Toyota is ceding more authority to key regions to take a leadership role in designing, developing and manufacturing products, such as the recently redesigned Camry sedan and the next-generation Toyota Tundra pickup.

Reporting to Lentz will be Osamu “Simon” Nagata, a company veteran who will oversee the “One Toyota” initiative meant to bring together Toyota’s previously autonomous North American operations, such as sales, product development and manufacturing.

Along with other senior changes in the region, said Lentz, “These are well thought out, carefully considered changes that will better position Toyota for sustainable, long-term growth both in North America and globally.”

Not all the changes are focused on North America. Another big move sweeps up Julie Hamp, who had been reporting to Lentz as the North American Region’s communications chief. She will be heading off to Tokyo in her new role as the leader of Toyota’s global communication efforts, making her the automaker’s first woman – and the first American – to oversee that critical role.

The New York City native, who earned her bachelor’s degree from Ferris State University in Big Rapids, Michigan, spent much of her career working in senior PR roles at General Motors before temporarily leaving the auto industry. During that detour she worked as communications chief for PepsiCo. She returned to the auto industry several years ago, taking on the North American communications job for Toyota while based in the Los Angeles suburbs.

Her move to Japan further emphasizes the company’s focus on North America. While considered the most traditional of the big Japanese automakers, Toyota has also taken key steps to give its U.S. region more authority in recent years. A growing number of products, such as the next Tundra pickup, are essentially all-American efforts.

(Click Here for full coverage of the 2015 Geneva Motor Show.)