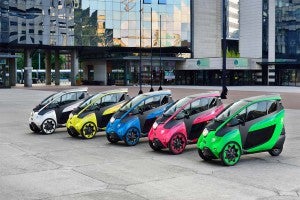 Toyota is using its i-Road EV as part of a carsharing project in Japan and France.

It looks like the illegitimate offspring of a motorcycle and a Smart microcar, and was initially laughed off as one of the endless stream of quirky concept vehicles Japanese makers have historically rolled out.

But the Toyota i-Road didn’t disappear like most of those concept cars after making its debut at the 2013 Geneva Motor Show. The pint-sized three-wheeler is about to be offered for public use as part of a carsharing program in Tokyo. It’s also part of a public transport plan being developed by the French city of Grenoble.

The i-Road makes the Smart Fortwo looks positively huge. The diminutive vehicle can squeeze in two – just barely – seated tandem style. And it’s not designed to replace a conventional automobile. Toyota says it I meant to be used for “the last mile,” in conjunction with a mass transit system.

Millions of Tokyo workers commute into the city each day, and the idea is that rather than take cars onto the city’s overcrowded network of elevated expressways, some might choose to switch to rail then, if they need a car once they reach the city, they could opt for an i-Road. Like a more conventional motorcycle, it is small enough to zip in and out of traffic.

The trial will be run through carsharing service Park2, which will make the little machines available to Times Car Plus corporate members and some individual members, as well. 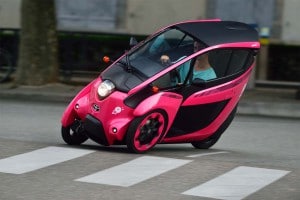 The Toyota i-Road seats two people tandem style and has a range of 31 miles.

“The focus is on i-Road being used for one-way trips to businesses, shops and sightseeing locations,” Toyota explains. “Users will pick up their vehicle from the Times Station at the Yurakucho ITOCiA shopping center and later return them to any of five central locations.”

Like a motorcycle, the i-Road is designed to lean into turns. Users will be required to go through a brief training course before they can drive the vehicle. They’ll then pay 412 yen, about $3.50, for every 15 minutes, with a maximum time limit of 2.5 hours.

What Toyota calls a “personal mobility vehicle” is barely 7.7 feet long, and less than three feet wide. It can make a turn in a mere three feet. Four of them can be parked in a traditional parking spot.

The lithium-ion-powered i-Road has a 2.7-horsepower electric motor and can only reach speeds of 28 mph, typically more than enough for use in a city like Tokyo, it can travel up to 31 miles per charge.

The partnership with Park2 is part of Toyota’s Ha:mo urban mobility project. And the maker is working on a similar program in Grenoble.

(To see more about how makers are adding more truck jobs, Click Here.)

The i-Road project in Tokyo will begin in April and run through the end of September. The maker says it will analyze data to see whether there’s a real commercial opportunity for vehicles like this to be a part of its future product portfolio.