Audi Powers up the R8 e-tron, Takes Aims at Tesla 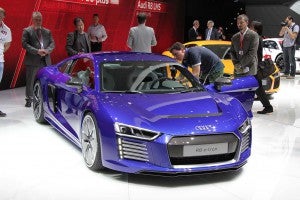 The new Audi R8 e-tron shown on the maker's stage at the Geneva Motor Show. The new 2016 Audi R8 V10 Plus is in the background.

Tesla isn’t the only automaker out to prove that battery-cars can deliver serious levels of performance. After a long delay, Audi has revealed an all-electric version of its newly redesigned 2-seat sports car, the R8 e-tron.

Making its debut alongside the new, gas-powered R8, the e-tron tucks a T-shaped lithium-ion battery pack into the sports car’s low body, along with two electric motors. The combination not only can launch from 0 to 60 in less than four seconds, but it can deliver as much as 280 miles of range per charge, nearly triple what most of today’s electric vehicles can manage.

Likely to be priced above the rest of the new R8 line-up, Audi says it will produce a small number of largely hand-built e-trons “upon customer request” this coming year.

Audi was one of the first Volkswagen AG brands to explore the options of going electric. But an earlier R8 battery prototype never made it into production. The maker apparently wanted to wait for the launch of a second-generation sports car – a move that made it easier to design around the need to squeeze a big battery pack, motors and controllers inside an otherwise compact body.

(Click Here for a closer look at the conventional version of the 2016 Audi R8.)

A major chunk of the T-shaped pack fills the center tunnel normally used for the driveshaft in the gas-powered all-wheel-drive version of the R8. The rest is tucked in behind the two passenger seats. Relatively low, the layout actually enhances the e-tron’s center of gravity, Audi claims. 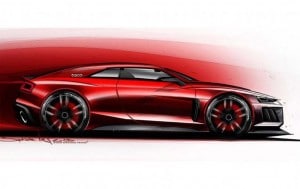 Audi has toyed with several earlier e-tron concept vehicles, including this one revealed in 2010.

In all, there production car gets a full 92 kilowatt-hours of lithium power compared with the 49 kWh of the earlier concept Audi R8 e-tron. That boost serves several purposes. For one thing, there’s that 280 miles of range which rivals the top version of the Tesla Model S and would give a buyer the ability to drive the sports car more like a conventional vehicle, not constantly having to think about where the next charge might come from.

Charging up, incidentally, can take as little as two hours, according to Audi, with a high-power charging system.

But it does sacrifice the standard Audi R8’s all-wheel-drive Quattro technology. The maker claims the twin electric motors, one for each of the big wheels, largely can overcome any traction issues. Among other things, the e-tron will have an electric torque vectoring system that delivers power to the outer wheel to help steer the sports car through tight turns.

Batteries are heavy beasts, and Audi had to cope with the mass of a large pack. It compensated for that in a number of ways, among other things using lightweight carbon fiber for several components, including the rear-section module that houses the luggage compartment. The design also is said to help absorb more energy in the event of a rear collision.

A revised fascia and other tweaks to the body have also helped improve the R8 e-tron’s aerodynamics which means both better range and improved performance.

Meanwhile, the Audi R8 e-tron gets a new high-power brake regeneration system. It’s still designed to recapture energy normally lost during braking and coasting, but it can send energy back to the battery pack at a faster rate than with earlier brake systems.

While the Volkswagen AG subsidiary isn’t talking hard numbers, the R8 e-tron is likely to be produced in small numbers. Indeed, it appears that the maker isn’t necessarily looking to the project as a profit center, but more a way to learn about advanced electric vehicles.