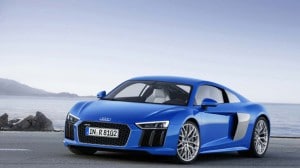 Audi's new R8 gets a freshened look on the exterior, but under the hood is where the biggest transformation takes place.

Audi’s strikingly stylish R8 supercar is up for a remake, and while there will be a number of visual updates to 2016, the big news is added performance. The R8’s big V-10 will now churn out 610 horsepower and launch it to a top speed of 205 mph, making it a serious challenger to exotic brands like Ferrari, Porsche and Lamborghini

Perhaps best known as the car of choice for silver screen superhero Iron Man, Audi has launched a steady stream of enhancements since introducing the original R8, taking advantage of the company’s successful racing program.

“Motorsport is in Audi’s genes, it has always been a permanent feature of our brand’s character,” says Audi technical chief Ulrich Hackenberg said in a statement. “With the new Audi R8, our engineers are bringing accumulated racing expertise from the race track onto the road.”

While the basic design may look a lot like the one driven by actor Robert Downey Jr. in the role of billionaire genius Tony Stark, the reality is that this is a ground-up redesign. Under the two-seat body is an all-new Audi Space Frame chassis that trims about 15% off the old model’s weight, coming in at a mere 441 pounds. The entire vehicle, in its most lavishly equipped spec weighs just 3,205 pounds, about 110 pounds lighter than before. 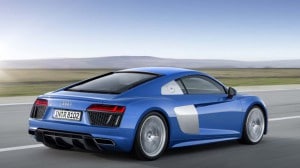 The new Audi R8 boasts 610 horsepower as part of its new look.

Give credit to the extensive use of aluminum and carbon fiber. The combination not only put the 2016 Audi R8 on a diet but improved torsional rigidity by about 40%

What’s particularly impressive is that Audi is delivering both more power and improved mileage with the new V-10 by using a number of technical tricks, including both direct and indirect injection, cylinder activation, and stop-start, as well as dry-sump lubrication and a variable exhaust system.

Audi delivers that power through a new seven-speed dual clutch transmission linked to a special version of its Quattro all-wheel-drive system through a mechanical differential. It can shift 100% of that torque to either the front or rear wheels, as needed.

Oh, and you can order either the stock 19-inch package or big 20-inch wheels and tires.

Incidentally, don’t think Audi is done testing the limits of the new R8’s performance potential. It’s expected to add a new version of its e-Tron hybrid model that will deliver 456 horsepower — a seemingly modest number until you realize that gas-electric combination also can thrust out an amazing 679 pound-feet of torque. A new R8 LMS is also expected to follow, targeted at the GT3 racing series.

Visually, Audi has maintained the low, wide and muscular look of the original R8, with its cockpit pushed forward to clear space amidship for the Big V-10. The overall proportions have changed slightly, the 2016 Audi R8 now measuring about 1.6 inches wider than before.

The new model now comes with LED headlights as standard gear, but buyers can opt for new laser high-beams that double the range of the standard lamps to nearly 2,000 feet. Unfortunately, unless U.S. regulators change current guidelines, the laser lamps will not be available in the states. To avoid blinding oncoming drivers an intelligent, camera-based systems automatically adjusts the light pattern when it spots traffic.

Inside, the driver-centric cockpit gets a new digital gauge display, more controls on the steering wheel, an a huge 12.3-inch infotainment display.

(To see more about Kia’s Sportspace and how it will impact the new Optima, Click Here.)