What you see is likely to be what you’ll get. 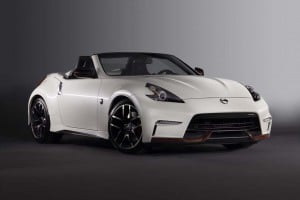 Nissan is giving strong consideration to building the convertible version of the NISMO 370Z.

There was a time when concept cars were little more than fantasies in chrome, having little more to do with reality than the speeder Luke Skywalker manned in the original Star Wars film.

Well, the new Nissan 370Z NISMO Roadster Concept looks like it would be nearly as much fun, but if recent trends hold true, there’s a good shot you’ll be able to park one in your driveway sooner, rather than later. These days, automakers have a habit of testing customer response and teasing what they’re already planning to bring to market, few more effectively than Nissan.”

That said, as “the ultimate expression of the brand,” Nissan wants to make sure the 370Z Roadster Concept is the right fit for its performance division, NISMO, stressed Pierre Loing, vice president of product planning.

“The NISMO name is not to be taken lightly,” said Loing of the ragtop prototype making its debut at the Chicago Auto Show this week, “nor are Nissans that wear the NISMO badge.”

Officially declared a “one-off design study,” the roadster was “created to gauge market interest in the ultimate factory Z roadster,” Nissan said in a statement. 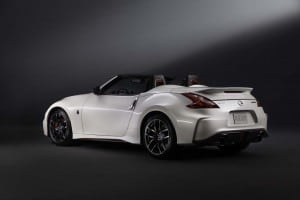 The Concept version of the NISMO Convertible gets 18 hp than a stock 370Z Roadster.

While it may share the same roots as a standard-issue 370Z, there are plenty of unique details, starting with the 350-horsepower 3.7-liter V-6 under the roadster’s hood. That’s 18 hp more than a standard 370Z, the Roadster Concept also rated at 276 pound-feet of torque.

The NISMO Z Concept also gets a unique, track-tuned suspension, with a strut tower brace, and unique springs and stabilizer bars.

From a visual standpoint, the Roadster Concept picks up some functional and fully integrated aerodynamic body pieces inspired by the NISMO GT-R. That includes a deep front with LED daytime running lights, black headlight bezels and signature NISMO red stripes. That color scheme is picked up a number of places, including the leather-wrapped headrest bars.

The Concept does get a unique carbon fiber rear spoiler.

(Nissan offers a peak at the next-generation Maxima. Click Here for a closer look.)

As for the convertible top, it’s a single-action unit with auto lock, just like the mainstream 370Z Roadster.

The exterior look is finished off with wide and super-light NISMO 19-inch wheels and special Y-rated Bridgestone tires. 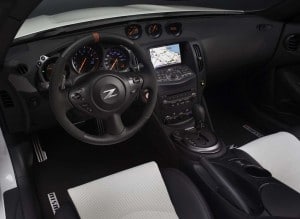 The Roadster Concept picks up the familiar NISMO red accent stripes, both inside and out.

Inside, the show car is fitted with black Recarro seats with those familiar red accents, an Alcantara and leather-wrapped steering wheel and a NISMO red tachometer. There’s a 7-inch navi and rearview display, and a Bose audio system featuring six speakers and twin subwoofers.

If it does get a thumbs-up from potential buyers – and a subsequent nod from Nissan – the 370Z Roadster would join four other models in the expanding NISMO family, including versions of the Z Coupe, the GT-R and both the Juke NISMO and Juke NISMO RS.

But it’s clear the maker is leaning that way, Loing admitting Nissan has been considering the idea “for a long time. The creation of the 370Z NISMO Roadster Concept brings that idea to life and lets us judge consumer reaction – which we predict is going to be outstanding.”

The performance brand has been gaining in popularity. Try to order a GT-R version and you’ll be in for a long wait. The NISMO models account for about 15% of Juke sales and 20% of 370Z Coupe sales.