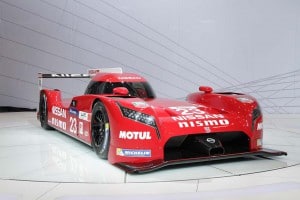 Nissan gave everyone a real-world look at its GT-R LM NISMO racer it previewed during the Super Bowl and plans to race at the 24 Hours of Le Mans endurance race later this year.

“This is one of Nissan’s biggest motorsports projects in its 80-year history,” said Darren Cox, NISMO marketing manager.

The racer officially shown to the public today for the first time “is basically Le Mans-spec.” But they will tweak the design before the big race at Le Mans, and it will undergo other aerodynamic revisions for each track during the endurance series.

While the effort represents a big commitment to motorsports, one of the car’s drivers was discovered in an unconventional way. Jann Mardenborough didn’t go through the classic steps to become a racer. He was racing on a PlayStation just three years ago and made his big break through the Nissan GT Academy which they developed to help find some new talent. 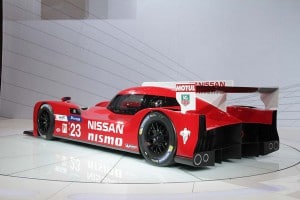 Unlike other LM P1 cars, Nissan notes, the GT-R's V6 3.0-liter twin turbo gasoline engine sits in the front of the front-wheel-drive car.

The race car was part of Nissan’s first appearance during the Super Bowl in more than 15 years, as viewers got a glimpse of the Nissan GT-R LM NISMO.

“The combination of the Super Bowl and the Le Mans 24 Hours – two of the most watched sporting events in the world – presented us with a unique opportunity to showcase our most ambitious motorsport program in recent times,” explains Roel de Vries, global head of Marketing and Brand Strategy at Nissan.

The extended-length commercial featured the music of the late singer Harry Chapin’s “Cats in the Cradle,” and was meant to tug heartstrings by featuring a child growing up as his father was often absent while pursuing his racing career – the two finally reconnecting as he hangs up his helmet for the last time.

The GT-R LM NISMO was one of an assortment of Nissan track and street vehicles displayed during the commercial.

In the real world, Nissan hasn’t had a vehicle in the flagship LM P1 class in 16 years – though it has maintained a number of irons in the endurance racing fire. It will be supplying engines for the LM P3 series.

In recent years, it ran a wildly innovative series of dart-shaped vehicles in a lower class. It partnered with Georgia-based DeltaWing in 2012 on an ultra-light and super-aerodynamic experimental vehicle that operated out of what is known at Le Mans as Garage 56. The partners split up the following year, but Nissan returned with a similar design – triggering an ongoing lawsuit.

“Our Garage 56 projects have led us to LM P1 and the innovations that we have employed,” explained Shoichi Miyatani, president of NISMO. “Enormous lessons were learned from the very heavy hybridization of the Nissan ZEOD RC, and we’ve carried those lessons over into this project.”

The new GT-R LM NISMO is a somewhat more conventional LMP1 design, a long-nosed, closed-top racer powered by a 1250-horsepower, 3.0-liter twin-turbo V-6 paired with a kinetic energy recovery system. That is the track equivalent of a hybrid, giving the vehicle the ability to recover and reuse energy normally lost during braking and coasting. And Nissan says it is focusing, on the whole, on energy efficiency.

“Sustainability is at the top of our agenda,” said Miyatani, “and the technical regulations for Le Mans give us the freedom to pursue new ideas in this area.”

(Ford turns up the heat with track-ready Shelby GT350R. Click Here for a closer look.)

Nissan is being tight-lipped about other details, though it notes the GT-R LM NISMO uses an unusual front-engine, front-drive configuration it says will be capable of reaching “200 mph plus.”

Nissan plans to run the GT-R LM NISMO in the FIA World Endurance Championship, with the racer set to debut at Silverstone, in the U.K. on April 12. The increasingly global series will stage additional races at not only Le Mans, but Belgium’s Spa and  Germany’s Nürburgring, before going traveling to the U.S., Japan, China and the Middle East.