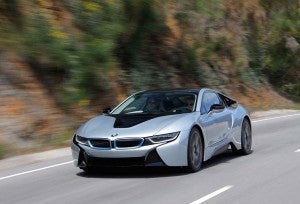 BMW's i8 captured the Luxury Green Car of the Year for 2015 from the Green Car Journal.

The automotive award season continued today with the Jeep Grand Cherokee, BMW i8 and F-150 all taking home Green Car awards during at the Washington D.C. Auto Show.

The Jeep Grand Cherokee EcoDiesel was named Green SUV of the Year and the i8, a plug-in hybrid sports car, was named Luxury Green Car. The F-150 captured the Green Car Technology award for its new design, including the use of aluminum that cut 700 pounds off the truck.

“These are truly commendable vehicles representing the ‘best-of-the-best’ in so many ways,” said Ron Cogan, publisher of the Green Car Journal, in a statement. “The auto industry’s very early focus on small cars and efficiency-for-environment tradeoffs has evolved to now include a more dynamic field of ‘greener’ models in all vehicle classes.” 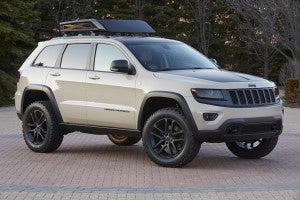 Jeep ruggedness with an EcoDiesel engine means more than 700 miles on tank of fuel with off-road capability.

It features a carbon fiber passenger compartment and an aluminum drive module with a gasoline engine, lithium-ion batteries and electric motor. The i8 can drive on battery power for 22 miles and up to 310 miles on hybrid power.

The Grand Cherokee beat out the Honda CR-V, Hyundai Tucson Fuel Cell, Lexus NX 300h and Mazda CX-5. The Jeep Grand Cherokee’s 3.0-liter EcoDiesel V-6 offers up to 30 highway mpg and is approved for B20 biodiesel use.

An Eco Mode optimizes the eight-speed transmission’s shift schedule, cuts fuel feed while coasting and directs the air suspension system to lower the vehicle at speed for aerodynamic efficiency, according to Green Car Journal.

(Click Here for details about Ram 1500 EcoDiesel’s win as Green Truck of the Year.)

The victory of an EcoDiesel powered SUV isn’t all that surprising. The magazine handed out its Green Truck of the Year award in November and the Ram 1500 EcoDiesel won. The Ram beat out four other trucks, including another Ram – the 1500 HFE – to win the honor. The other finalists included Chevrolet Colorado, GMC Canyon and the Ford F-150.

(To see more about Toyota breaking ground on its new headquarters, Click Here.)

The Cadillac ELR’s “Regen on Demand” system was honored as the Green Car Technology Award winner in 2014.