Ram 1500 EcoDiesel Drives Off with Green Truck of the Year

Truck beats out ballyhooed all-aluminum F-150 for the title. 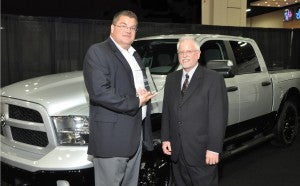 The Ram 1500 EcoDiesel captured the Green Car Journal's "Green Truck of the Year" award for 2015.

The Ram 1500 EcoDiesel walked off with another big award, this time the 2015 Green Truck of the Year from the Green Car Journal, which has been singling out the most fuel-efficient vehicles in the U.S. for more than two decades.

The Ram beat out four other trucks, including another Ram – the 1500 HFE – to win the honor. The other finalists included Chevrolet Colorado, GMC Canyon and the Ford F-150. The magazine made the announcement at the 46th annual San Antonio Auto & Truck Show.

While pickups aren’t normally associated with the word “green,” auto companies have been working diligently at making trucks more fuel efficient. In addition to the EcoDiesel, Ford has been heavily promoting its EcoBoost-powered F-150s in recent years and Chevy has been pumping up the mileage figures for its full-size pickups too.

Green Car Journal editors looked at all truck models in the U.S. market, weighing environmental attributes alongside the traditional touchstones that define what makes a great pickup, such as functionality, versatility, safety, value and style. The Green Truck of the Year jury made up of automotive experts and Green Car Journal staff selected the winner from five finalists.

“The Ram 1500 EcoDiesel is an incredible success for Ram Truck and part of the brand’s long term strategy to design and engineer the best trucks you can buy with fuel economy and capability top of mind,” Hegbloom said after the award announcement. “We are thrilled to receive The Green Truck of the Year award, affirming our efficiency leadership in the truck market.”

The award boosts Chrysler Group’s efforts to grab a larger share of the full-size truck market while archrival Ford, which is in the midst of a sweeping changeover of the F-150 that will take months to complete. Ram Division President Robert Hegbloom recently said Chrysler’s goal is to grab as much share as its can while Ford makes the transition to an aluminum truck.

Meanwhile Ram is also boosting Chrysler’s profits in what TrueCar president John Krafcik said earlier this week is clearly one of the industry’s most profitable segments.

Krafcik also said truck makers have generally been risk adverse, but Chrysler elected to gamble on the new generation of diesel engine built by a subsidiary of its Italian partner, Fiat. The gamble has paid off as more than 10% of Ram full-size pickups are purchased with the more expensive diesel engine and Chrysler has announced plans to boost the diesel/gas mix in the pick-up segment to 20% this month, which could further boost Chrysler’s revenue from truck sales.

In the past, Chrysler has been chastised for lagging in fuel economy but the EcoDiesel-powered Ram 1500 earned a 28-mpg rating from the U.S. Environmental Protection Agency (EPA), the best highway-cycle test result ever achieved by a full-size, half-ton pickup. It also exceeds the EPA highway rating for the top-ranked small pickup, such as the new midsized trucks from General Motors, Chrysler officials noted.

(Click Here for details on the Scion Tuner Challenge at SEMA.)

The relative success of the EcoDiesel is expected to prompt GM and Ford to bring their own small diesel-powered pick up to market sooner. Nissan has already committed to building a full-size pickup with diesel engine from Cummins next year.

(To see the finalists for the Green Car awards, Click Here.)

“The Ram 1500 EcoDiesel exemplifies what a ‘green’ truck should be,” said Ron Cogan, editor and publisher of the Green Car Journal and CarsOfChange.com. “It’s a heavy-hitter that pulls off exceptional fuel economy with its impressive EcoDiesel engine and array of efficiency features like active grill shutters and aero suspension. Pickup buyers get the best of all worlds with the beefy torque and environmental performance offered by this full-size and stylish pickup,” he said.

The magazine announced its finalists for its Green Car of the Year award earlier this month. The honor, which will be handed out at the L.A. Auto Show, will go to one of the following: Audi A3 TDI, BMW i3, Chevrolet Impala bi-fuel, Honda Fit or Volkswagen Golf. The Green Car Journal’s awards date back to 1992 and are generally considered an important honor by automakers and independent analysts.