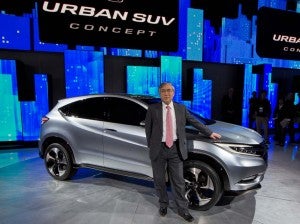 Takata's troubles are getting worse as Honda's global auto chief Tetsuo Iwamura said today it was rethinking its relationship with the supplier.

Takata’s problems with defective airbags – so far linked to at least four deaths – continue to worsen as a pair of New York law firms yesterday filed what they hope will be approved as a class action lawsuit against the troubled Japanese supplier.

The new lawsuit, which was filed in U.S. District Court in Florida, is the first attempt to gain class-action status. It also named Toyota, Honda, BMW and Ford as defendants.

“The serious danger posed by the lethal Takata airbags was not disclosed to U.S. safety regulators until 2008, despite red flags raised by the 2001 Isuzu and 2004 Honda exploding airbag incidents,” according to a filing by New York-based law firms Labaton Sucharow LLP and Baron & Budd, P.C.

Honda received three additional reports of airbag rupture incidents in 2007, but never issued recalls or told U.S. safety regulators that the incidents involved exploding airbags. Finally, in November 2008, Honda informed U.S. authorities that it had a problem with some of the Takata airbags installed in its vehicles. However, at that time Honda recalled 4,000 Accords and Civics.

If a cover-up becomes apparent that could, in turn, trigger criminal investigations. The U.S. Justice Department has become much more aggressive in addressing such problems, levying a $1.2 billion fine against Toyota for its handling of a series of recalls in 2009 and 2010. It has another investigation underway looking into General Motors’ ignition switch recall. Separately, Takata already has been fined for its role in a broad auto parts bid-rigging scheme, several of its executives handed down jail terms.

In a lawsuit filed in the Central District of California, five drivers of BMW, Honda and Toyota cars claimed their vehicles were unsafe because of the airbags. Takata and the carmakers “did not fully investigate or disclose the seriousness of the issue and in fact downplayed the widespread prevalence of the problem,” according to the lawsuit.

Claribel del Carmen Nunez sued Takata and Honda in Florida last week, claiming she was injured after a defective air bag in her car exploded and a metal shard hit her in the forehead. Both Takata and Honda were negligent in failing to test the air bag, according to the suit.

While the initial recall of 7.8 million vehicles is large, it’s likely to grow, according to reports. Currently, the vehicles equipped with the airbags are subject to just a regional recall. Pressure has been mounting on the National Highway Traffic Safety Administration from politicians and safety advocacy groups to expand the recall on a national basis. Some estimates predict that could boost the U.S. total alone to more than 20 million.

The costs of such an action will escalate quickly. Even at the current level, the total could readily top $1 billion or more, according to various experts, depending on the extent of the repairs. Who would cover the costs is also unclear, though manufacturers would likely seek to recover at least some of the burden from Takata. Ford, meanwhile, recently confirmed it plans to spend about $500 million on repairs related to a separate airbag-related recall, which is one of the reasons its stock price took a nosedive.

Further complicating Takata’s problems, the maker could lose some of its major customers, including Honda, which has used the supplier’s safety systems in a wide range of its vehicles.

“We are reviewing our ties with Takata in terms of quality and supply,” Tetsuo Iwamura, Honda’s executive vice president overseeing North American operations, said at a news conference in Japan today.