CEO Barra to offer up some details of next Chevy Volt project. 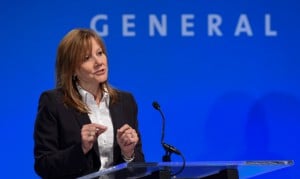 (This story has been updated with additional comments by GM CEO Mary Barra.)

Among other things, the maker plans to invest $300 million in its home state of Michigan by year-end, a chunk of that cash going to set up the Warren Transmission Plant to produce the next-gen Volt’s plug-in drivetrain. Virtually all key powertrain components, from Volt’s batteries to its gasoline “range-extender” engine, will be built in Michigan going forward.

“Our investments in the Chevy Volt and Michigan signify our commitment to lead the industry in technology and innovation,” CEO Barra told the Detroit Economic Club.

The remake of the Chevrolet Volt is scheduled to debut at the 2015 North American International Auto Show in Detroit, marking the first major update to the so-called extended-range electric vehicle since it went on sale late in 2009.

The new version will be a critical test for General Motors’ electrification efforts considering the decline in demand for Volt this past year. It had earlier been the top-selling plug-based vehicle in the U.S. but has slipped behind key rival, the all-electric Nissan Leaf.

“We must provide the breakthrough technology that our customers want,” Barra told the gathering of Michigan business leaders.

(Limited “geographic recalls” could be putting millions of American motorists at risk. Click Here for the exclusive TDB report.) 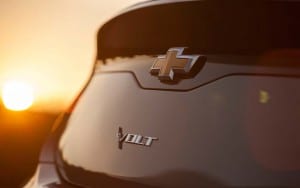 Chevrolet recently offered up a tease of the 2016 Volt plug-in hybrid it will unveil at the Detroit Auto Show.

While GM is holding back on specifics, Barra did offer some strong hints as to what will come with the debut of the Gen-2 Chevrolet Volt.

“It will store more energy in its battery pack with fewer cells, yet go further on a charge,” she noted, adding the 2016 plug-in “will accelerate faster and the car’s gas generator will come from an all-new GM engine family and use even less fuel.”

By downsizing the Volt’s lithium-ion battery pack, it may no longer be the T-shaped lump that divides the passenger compartment in half.

GM has confirmed it will shift to a new 1.5-liter 4-cylinder range-extender engine that will be both more fuel-efficient yet more powerful while also offering a more pleasant driving experience while operating. As before, Volt generally will run on battery power alone for somewhere in the range of 40 miles, switching on its internal combustion engine only when extra power is needed, or when the battery charge runs down.

Thanks to a $240 million investment, the Warren Transmission Plant in suburban Detroit will build the GM Voltec 4ET50 Multi-Mode Electric Drive Unit that brings the two sources of power together. The component is currently being assembled in Mexico.

Battery packs for the next-gen Volt will continue to roll off the line at another suburban Detroit facility. The batteries themselves will be produced at a factory operated by Korea’s LG Chem in Western Michigan.

GM still plans to produce the electric motors for the Volt at a plant in Kentucky.

While Chevy Volt sales have struggled over the past year, the overall electric vehicle market has gained ground, albeit at a pace only slightly ahead of the overall U.S. automotive market recovery. And that’s with a number of new vehicles coming to market. According to InsideEVs.com, there are currently 22 plug-based models on sale in the U.S., up from 16 a year ago.

Despite its challenges, GM has said it plans to expand the number of battery-based models it will offer in the next several years.