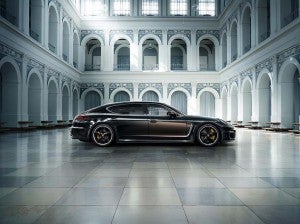 The Porsche Panamera Exclusive Series is creating a little sibling rivalry with the Bentley Continental GT.

When it comes to the upper reaches of the luxury car market, it’s getting hard to tell the players without a scorecard. And that means some sibling brands are suddenly turning into rivals.

The latest example comes with the unveiling of the new Porsche Panamera Exclusive Series. While it’s not the most expensive model the German maker has ever offered – at barely a third the price of the 918 Spyder ultracar – the limited-edition sedan lands well above the “base” Bentley Continental GT and not much below the British maker’s top-line Mulsanne model.

Then again, Bentley is getting ready to roll out an all-new luxury SUV, which could start siphoning sales away from Porsche, its Volkswagen Group partner.

Bentley doesn’t have to worry much, however, Porsche plans to produce just 100 copies of the $264,885 Panamera Exclusive Series – a figure that includes $995 in destination charges. The special version, one of the last variants before the Panamera undergoes a major makeover, will be unveiled at the L.A. Auto Show in less than three week’s time. 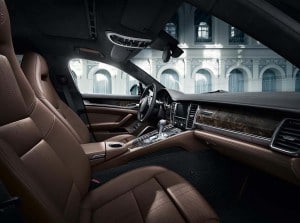 The interior of the Porsche Panamera Exclusive Series.

The heart of the new Panamera Exclusive Series is a 570-horsepower V-8 driving all four wheels and which is derived from the current Panamera Turbo S Executive model.

The Exclusive line will mark the first time Porsche has done up the Panamera in two-tone paint, a Jet Black metallic contrasting Chestnut Brown metallic, both colors applied by hand. For those who prefer, more conventional hues are available.

The maker claims to be using “exceptionally soft” leather in chestnut brown finished by Italian studio Poltrona Frau. Along with contrasting leather elements, the trim includes dark walnut wood that transitions into deep black piano lacquer from the front of the car to the rear.

One would only expect an exclusive infotainment system, of course, and there are two 10.1-inch touchscreens built into the back of the front headrests, with a built-in camera and individual DVD players. Audio is provided by exclusive maker Murmester.

(Click Here for details about the Nissan Leaf breaking it’s own EV sales record in the U.S.)

Each Panamera Exclusive Series model is completed with a numbered interior plaque – and a custom-tailored luggage set with two trolleys can be added as one of the few available options.

(To see more about the automotive partnership between Michigan and Israel, please Click Here.)

Bentley is likely to launch its upcoming SUV, however, at a price tag well above the current Porsche Cayenne. Then again, perhaps the Germans will give the Exclusive Series treatment to their SUV next.