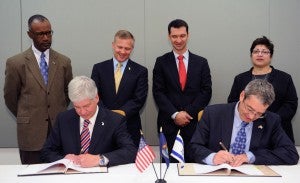 Aside from having reputations for being tough, resolute and gritty, the State of Michigan and Israel are adding a new entry to their list of descriptors: technology leaders.

The Michigan Economic Development Corp. and the Israeli Ministry of Economy are partnering to form the Michigan-Israel Technology Connect program to spawn new ideas for electric vehicles and driver protection.

Using their respective networks and databases, the MEDC and MATIMOP, the Israeli Center for R&D, will help companies identify potential partners for this program. In addition, it is anticipated that companies will be seeking their own partners independently. Each project will require one partner based in Michigan and another based in Israel.

“We are looking forward to utilizing this new R&D collaboration program between Michigan and Israel in order to further deepen the existing business ties between both regions,” said Avi Hasson, chief scientist at the Israeli Ministry of Economy.

“Investment in R&D will generate long term economic benefits both in Michigan and in Israel and support job growth across a multitude of trade sectors.”

This new effort is expected to stimulate development and commercialization in the automotive sector, cyber Security, and the convergence of cyber/Auto and cyber/defense, as well as water technology.

Both Michigan and Israel are forging advancements in the area of automotive technologies.

Mobileye, the Israeli company that has developed vision-based advanced driver assistance systems that warn of collision prevention and mitigation, just completed a highly successful public offering. In fact, Tesla Motors is using the company’s collision avoidance technology in its new suite of offerings that make its vehicles nearly autonomous.

Working with the University of Michigan and several other companies, Michigan is the midst of equipping key roadways to test vehicle-to-vehicle communications with support from General Motors and other major companies.

GM’s Chief Executive Officer Mary Barra said this week the automaker was joining forces with the Michigan Department of Transportation, the University of Michigan and other automakers to create V2X-enabled corridors on 120 miles of metro Detroit roadways.

(Click Here for details about why bicycle deaths are up in the U.S.)

“This will provide connected cars almost instantaneous information about traffic conditions, road and lane closures and more. The first ‘connected corridor’ will be the stretch of I-96/I-696 from US-23 in Brighton east to I-94 in St. Clair Shores, which has some of the heaviest traffic volumes in the state,” she said.

“Again, the reason it will happen in Southeastern Michigan is because we have the scientists and engineers and expertise to lead the world in this critical area,” Barra noted.

(To see more about the pressure the feds are exerting on Takata, Click Here.)

GM has placed a significant bet is on the electrification of the automobile. We introduced the Chevy Volt in late 2010 and in the intervening four years we have learned a lot about both the challenges and the promises of designing, engineering, manufacturing and selling an electric vehicle, which will be centered in Michigan, Barra said.

“Michigan’s longstanding ties with Israeli companies and academic institutions have created excellent opportunities to improve trade, increase business investment and scientific research. The joint projects that will come out of this partnership will build on these highly productive relationships,” according to Michigan Governor Rick Snyder