Maker sets target of zero deaths in its new vehicles. 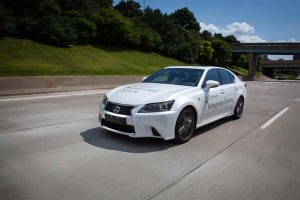 With a new industry study set to be released this month showing how the latest high-tech automotive safety features are saving thousands of lives, Toyota Motor Co. plans to become the first automaker to offer key crash-avoidance technologies on all its models by 2017.

Electronic stability control is already showing tremendous results, according to a study that will be released by the Insurance Institute for Highway safety. The technology is already mandated by the government for all new vehicles sold in the U.S. But even more advanced systems using radar to detect a potential crash and, in some cases, actually stop a vehicle without driver intervention, could save thousands more.

Toyota indicated it will offer some version of pre-collision technology across the board, Seigo Kuzumaki, its chief safety technology officer, declaring, “We are entering an entirely new era of mobility,” during a seminar in Ann Arbor, Michigan.

The ultimate objective of Toyota’s research is to reduce deaths and injuries to zero, he added. Competitors Volvo and Nissan have also set out corporate goals of achieving zero deaths and serious injuries in their new vehicles, the Swedish maker saying last week it believed it can get there by 2020.

(Death-free highways have become a real possibility. Click Here to see why.)

Downsizing and cost reduction are the keys to achieving not only this goal, but to putting fully autonomous vehicles on the road by 2020, Toyota researchers said.

In an industry that long operated under the mantra, “safety doesn’t sell,” the ongoing push to reduce that number has been a sharp U-turn, and has achieved significant results. But while the frequency of injury accidents per miles driven has declined, vehicle crashes still claimed 32,000 lives last year.

It’s not just traditional automakers driving the new push for advanced safety technology.  Google, which traditional automakers acknowledge has helped accelerate the development of autonomous driving, has emphasized that self-driving vehicles can reduce fatalities by eliminating the tedium that can contribute to driver distraction.

Toyota’s announcement could have an equally profound impact on the industry, as the maker’s competitors will have to consider how to respond on their own.

“Toyota’s vision is of a world without traffic fatalities, and these advanced connected and automated vehicle technologies hold the potential to revolutionize automotive safety,” Kuzumaki said. “We are committed to bringing advanced active safety systems to market as quickly as possible and will make them accessible to a broad range of drivers.”

Pre-collision systems first appeared on top-line vehicles such as the Mercedes-Benz S-Class, but have been migrating down to lower-price segments, but Toyota could accelerate that pace, according to analysts.

While semi-automated driving is getting closer, it not only requires new technology in the vehicle, it will also requires vehicle-to-vehicle communication and communication with the traffic environment and a careful study of how  the driver actually interacts with the new systems, said Kuzumaki, who has been instrumental in developing  the four fully automated vehicles that Toyota now has in operation.

The federal government last month said it was moving forward with plans that will likely soon require new vehicles to be able to talk to one another, and to a roadway infrastructure.

(Feds mull new rule to make cars talk to one another. Click Here for details.)

Pre-collision systems usually rely on radar transponders in a vehicle’s grille, or cameras mounted above the rearview mirror. But even more advanced technologies are coming, according to Toyota.

Kuzumaki said lower costs are critical to the utilization and development of technologies such as Single Photon Avalanche Diode/Light Detection and Ranging.  An advanced version of what is known as LIDAR, it is used on experimental autonomous vehicles, such as those operated by Google, to provide a more detailed look at the road and oncoming traffic.

In addition to performance improvements, the new system Toyota is using boasts reduced size and cost, allowing it to be installed onboard the vehicle instead of the bulky roof mounts of traditional LIDAR systems. There are trade-offs. Google’s system can see about 650 feet ahead of the vehicle but Toyota’s system can see 200 feet.

Toyota also has developed a 3D Heads-Up Display, or HUD, which provides critical information including vehicle status, traffic conditions and road signs, on the front windshield in three dimensions without the need for glasses. It was developed by Toyota Info Technology Center, U.S.A., Inc. and Calty Design Research, Inc. in Silicon Valley.

Toyota is also pushing ahead with the development of its Automated Highway Driving Assist (AHDA) system, which has been programmed on actual traffic conditions in the United States and can operate at speeds of up to 70 miles per hour.

The system integrates three technologies: Dynamic Radar Cruise Control, Lane Trace Control and Predictive & Interactive Human Machine Interface.  The former system supports the driver by helping to keep the vehicle in its lane and a safe distance from others on the road, all while travelling at highway speeds. The latter uses a camera and a touch sensor in the steering wheel to know when a motorist has essentially disengaged from the act of driving.