New study will show it is already starting to happen. 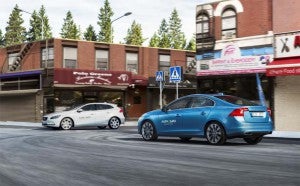 With the opening of its new proving grounds in western Sweden, the Volvo Car Group says it is moving “a step closer” to its goal of having no one killed or seriously injured in one of its cars by 2020.

Not long ago, such claims might have seemed the stuff of fantasy, or worse, cynical over-promise. While there’s no question that, in the U.S., highway fatalities have fallen nearly 40% from their peak, more than 30,000 Americans are still being killed each year. Nonetheless, we may very well be approaching an era when the highway death toll sinks to zero, industry experts believe.

A sign of that possibility will come with the release of a new study next month by the Insurance Institute for Highway Safety which will show a record number of vehicles experienced no deaths during the four-year study period from 2009 through the end of 2012.

Give credit, Rader said, to the significant improvements in both passive and active safety. A look at the results of crash tests run both the insurance trade group and by the National Highway Traffic Safety Administration reveals that today’s vehicles are far more likely to survive even the most serious crashes with occupants able to walk away, often without serious injury.

When the IIHS introduced its small overlap crash test a few years ago, only a handful of large vehicles were able to protect passengers satisfactorily. The number of models is improving every year. The 2015 subcompact Honda Fit failed badly when it first went through the test – designed to simulate hitting a pole or the corner of an oncoming car. This week, an upgraded Fit passed with flying colors, earning the organization’s Top Safety Pick rating.

Credit an improved bumper – which Honda says it will retrofit on early versions of the 2015 Fit free of charge. It’s just one of the many passive safety technologies that have been incorporated into vehicles to reduce injuries when a crash occurs.

In some cases, these improvements have come as the result of federal mandates, such as the tougher roof crush standard NHTSA recently enacted to improve survivability in rollover crashes. But where the industry mantra was once, “Safety doesn’t sell,” manufacturers now recognize the opposite is true, and they’re racing to come up with newer and better features to protect occupants.

Ford, for example, is now offering a combination airbag and seatbelt for backseat passengers in a number of its new models, such as the Flex “people-mover.”

Volvo says its new AstaZero proving grounds was specifically designed to allow it to test new safety systems, the facility’s CEO Pether Wallin stressing, “You can simulate all types of real-world traffic scenarios. At most proving grounds, the options are more limited.”

Passive safety systems are critical to ensuring the safety of vehicle occupants when a crash occurs, but the industry is putting growing emphasis on so-called active safety systems designed to prevent crashes in the first place.

(Feds mull new rule to make cars talk to one another. Click Here for details.)

Electronic stability control, or ESP, now required on all passenger vehicles sold in the U.S. “ is having a stunning effect in reducing crashes and crash deaths,” said IIHS’s Radar, by preventing the sort of slides and skids that were all too common in the past.

But that’s only a starting point. A growing number of vehicles are now equipped with radar-guided collision avoidance systems that can, for example, detect if another vehicle might run a red light ahead of you. Even more advanced technology can automatically apply the brakes if the driver doesn’t respond quickly enough.

The completely redesigned Mercedes-Benz launched last year is a technological showcase, even featuring infrared night vision that can spot a deer, a dog or a pedestrian.

There is a price to be paid. By various estimates, motorists are paying thousands of dollars more for new safety systems. The good news is that digital technologies, such as ESP, are showing the same, downward pricing trend as consumer electronics, meaning more features for less money. That could prove particularly important if the latest safety features are to migrate from developed markets like the U.S. to emerging countries such as China and India, where death tolls – measured either by vehicles on the road or miles driven – are much higher.

How much further can the industry go? Nissan is one of a number of automakers – as well as high-tech firms like Google – planning to put fully autonomous vehicles on the road, perhaps by as early as 2020.

“Today, the automobile finds itself at a significant turning point,” Nissan CEO Carlos Ghosn wrote in an op-ed for the 2014 World Economic Forum in Davos, Switzerland. “With the help of policy-makers providing clear regulatory oversight, (new) technologies could lead to ‘zero fatality’ roads within our lifetimes.”

(Are you teaching your teens bad driving habits? Click Here for the story.)