Major update in the works – but not for now. 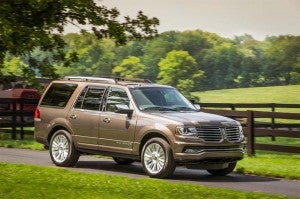 The most visually obvious change to the 2015 Navigator is the use of the new Lincoln grille.

Already confirming plans for four new vehicles by 2016, Ford Motor Co. has a number of additional new products in the pipeline for the years that follow, including a sporty coupe that will share the same platform as its new-for-2015 Ford Mustang.

There’s also a new version of its long-in-the-tooth Lincoln Navigator in the works – though, for now, buyers who want the full-size luxury SUV will have to settle for a largely warmed-over version of the big truck.

At least they won’t have to try to figure out a new nomenclature. While everything else in the Lincoln line-up has adopted a name starting with MK, the Navigator will remain the Navigator going forward.

That’s not entirely unprecedented. Cadillac, after all, has stuck with Escalade for its own full-size luxury truck, even as it also uses an alphanumeric strategy for the rest of its line-up, starting with the base-level ATS.

So, with the re-launch of the modest 2015 Navigator update, Lincoln officials said they wanted to stick with a name potential buyers would recognize – not only in the U.S., but in China, where the brand is just now opening its first showroom. Perhaps surprisingly, corporate research has found Chinese buyers surprisingly familiar with both the Lincoln and the Navigator names.

Back home, even though U.S. demand for full-size sport utility vehicles has shrunk over the years, the Navigator has retained a loyal following. Lincoln sells roughly 8,000 of the trucks annually and they are the most profitable vehicle in the Lincoln lineup, according to Navigator chief engineer Elaine Bannon, which makes the name too valuable to drop.

“We’re not going to give up the name,” Bannon said.

Going forward, don’t expect Lincoln to return to a more familiar naming strategy. The next MKZ won’t go back to being the Zephyr, Lincoln officials insist. The challenge will be to make sure future buyers will be able to differentiate between the various models Lincoln has planned. It has repeatedly focused on the four new models coming, including the MKC, a new compact crossover for 2016. The MKX will soon follow.

To the frustration of Lincoln’s leaders, Ford’s corporate level management has decided it’s not time to discuss the products that will follow, though recently retired CEO Alan Mulally did confirm there are other products well along in development, during an interview with TheDetroitBureau.com. That is expected to include a Lincoln take on the all-new Mustang.

The challenge will be not to just bring new products to market, but also to increase awareness of a brand that many American buyers have either written off or simply forgotten. Lincoln hopes models such as the new MKC will help draw new customers into its redesigned showrooms.

Until relatively recently, it seemed like the Navigator wouldn’t find a place on those showroom floors, Ford ready to abandon a big truck it hadn’t refreshed in years. It made a late U-turn, deciding to offer a modest update, including a few minor sheet metal tweaks and the brand’s new split-wing grille, while adding some essential new technology, and a more fuel efficient 3.5-liter EcoBoost V6 engine.

The revised version of the Navigator is not expected to attract a lot of new buyers, noted Joseph Phillippi, an independent analysts with Auto Trends  Consulting of Short Hills, New Jersey. But the niche is simply too important to abandon and leave to rivals such as Cadillac, with its more significant 2015 Escalade remake, or Lexus with its Lexus LX 570.

While the Navigator hasn’t undergone a serious facelift since 2007, Ford has sunk some serious money into upgrading the Navigator for 2015, he added.

Phillippi said the typical Navigator buyer is affluent and is looking for a vehicle that can carry passengers and their luggage, while also having the power to tow a boat or motorcycle trailer. In addition, Navigators are popular with livery drivers, who shuttle affluent customers from airports to hotels or other destinations.

Stephane Cesareo, Lincoln spokesman, said the typical Navigator customer is between 50 and 60 years of age and the typical household incomes is more than $200,000 annually – a target market that’s too important to abandon as Lincoln rebuilds.

The real question is whether the modest 2015 Navigator update can hold onto Lincoln loyalists, especially when Caddy has done so much more with the new Escalade. The best the big ute will be able to do, according to several well-placed company sources, is hold off the steady decline of a once groundbreaking model. Longer-term, Lincoln is working up a more significant remake of the Navigator, they reveal, that could make the big truck a serious contender once again.