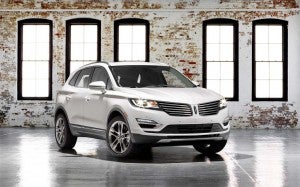 The 2015 Lincoln MKC is one of the lowest-priced models in its rapidly expanding segment.

Lincoln has a lot riding on the upcoming launch of its new MKC crossover, the latest in a series of all-new models intended to help revive the long-struggling luxury brand. With sales of compact CUVs booming, in fact, the new MKC could soon become Lincoln’s top seller, company officials noted during a media drive in Santa Barbara, California.

But preliminary orders for the compact crossover are already exceeding initial expectations in China, a market that could be the make-it-or-break-it for Lincoln’s long-term turnaround. 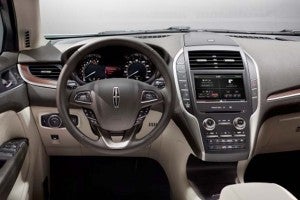 The MKC is one of four completely new models that Lincoln has confirmed it will bring out by 2016. The rollout began with the remake of the MKZ in late 2012. Next on tap is a redesign of the MKX midsize crossover. A concept version was unveiled at the Beijing Auto Show in April, with a production version due out in 2015. A remake of the full-size MKS sedan is expected to complete the strategy, though Lincoln also has a modest refresh of the big Navigator SUV coming for 2015.

(Lincoln looks East – but can China save an American icon? Click Here for the story.)

Lincoln officials aren’t talking about where they’ll go next. Not for the record, anyway, but sources quietly hint that an array of additional products will follow. A complete replacement for the Navigator is one of the new models in the works, and Lincoln plans to fill several other critical gaps in its line-up before the end of the decade.

“But we need to succeed in China to ensure we have the money to pay for that (next-stage) product program,” a high-ranking source confided in TheDetroitBureau.com.

For decades, the Ford luxury brand was largely limited to the North American market, with a few foreign outposts, such as South Korea. After three years of planning, it officially launched its entry into the huge Chinese market at the Beijing Motor Show, with a goal of having 60 retail outlets in place by 2016, noted Vandyke.

Ironically, he said, China provides the opportunity to virtually start Lincoln all over again, since the brand can carefully hand-pick its retailers and craft an entirely new marketing campaign without any residual baggage.

It does, however, have to go up against some tough and well established competitors, from Detroit-based rival Cadillac to luxury market leader Audi. So, Lincoln’s Chinese aspirations have been modest. But there are early indications it could be clicking with that country’s fast-emerging, upscale market.

Indeed, a source revealed that where Lincoln had originally hoped to sell between 40,000 and 60,000 MKC crossovers in its first full year, Chinese dealers have told the maker they could handle 40,000 of the vehicles on their own.

Vandyke and other Lincoln officials declined to discuss specific sales targets on the record. But the director of Global Lincoln made it clear he was optimistic about the possibilities China offered. Noting it is a “blank sheet,” he said it is “critical for us.”

The MKC itself, he said, “will be a substantial volume player,” and could become the brand’s number-one seller.

That said, Vandyke acknowledged that the maker has redoubled its efforts to ensure that the new crossover sidesteps the quality problems faced by the then-new MKZ last year. That caused significant delays and, worse, a marketing misfire with Lincoln spending much of its ad budget before it had many of the sedans available in showrooms due to production delays.

The maker is taking “robust” steps, he said, to avoid a repeat of the MKZ’s embarrassing delays.

The MKC is just going on sale in both the U.S. and China. American buyers will find several versions of the new crossover with a base price – including delivery charges — of $33,995 for the 2.0-liter EcoBoost front-drive model. A well-equipped MKC with the all-new 2.3-liter EcoBoost engine and all-wheel-drive goes for $44,565. Load up with options and you’re pushing over $50,000.

Whether the preliminary indications from China hold true remains to be seen. What’s clear is that the new Lincoln MKC will be going up against some tough competition, both at home and abroad, including the likes of compact crossover powerhouse like the Audi Q5, the Acura RDX and the BMW X3, as well as products to come, such as the Lexus NX.

(Click Here to check out the new Lexus NX.)