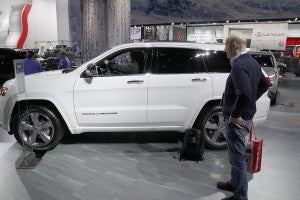 Jeep is planning on sales of the Cherokee and Grand Cherokee to remain strong as it attempts to surpass 1 million units by 2015. Photo credit: Len Katz.

Jeep has set its sights on selling more than 1 million vehicles annually by the end of 2015 and is also putting in motion a revolution that will help broaden its global reach and remake its product portfolio.

Fiat/Chrysler chairman Sergio Marchionne said this week that the company’s executives and board of directors will make several decisions in the next few months that will have a major impact the Jeep brand. A key issue waiting final approval from top management: the plan for the next generation Jeep Wrangler.

The Wrangler is an iconic vehicle that’s perennially in short supply and has unique characteristics. 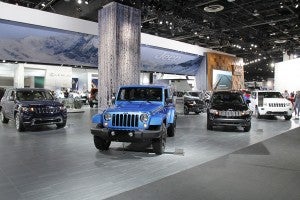 Coming up with a plan for the Jeep Wrangler is on list of priorities for company executives. Photo credit: Len Katz.

“It needs to be updated,” said Mike Manley, president of the Jeep brand. “It needs better fuel economy and different electrical architecture.”

“We’ll replace it with one global vehicle” at the end of 2015 or very beginning of 2015, he said. However, sales of both the Compass and Patriot remain strong and contributed to Jeep’s sales records in each of the past two years.

Chrysler/Fiat also is in the midst of finalizing a deal with the Chinese automaker Guangzhou Automotive, which will open the door to the Jeep brand’s re-entry into China. The agreement with Guangzhou should be complete by the end of the first quarter of 2014, he said. “After that we can start talking about plants and products (in China),” he said.

Marchionne also in negotiations are also between Fiat and Chrysler and the Brazilian government about the production of Jeeps in Brazil for the first time. 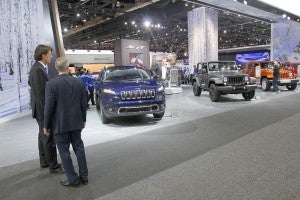 “That’s also a very important deal,” added Manley, who noted the first Jeepster or a small Jeep vehicle will be introduced during the Geneva Auto Show March. The small Jeep will be built in Italy and go on sale in Europe during the fourth quarter of this year and in the U.S. in the first quarter of 2015.

At the same time, Jeep is rebuilding its dealer network in Europe, Manley said. During the years, Jeep was part of DaimlerChrysler, it had managed to build a distribution network in Europe, he said. But it was scuttled after the de-merger in 2007.

(Click Here to see the top debuts in Detroit.)

Fiat, however, has helped Jeep rebuild in Europe. In fact, Jeep will begin export Jeep Cherokee’s from Europe beginning by the end of the first quarter. The Cherokee also will be exported to China this year said Manley.

The strong sales of the Jeep Cherokee, the continuing strength of the Grand Cherokee and Wrangler and the expansion of the exports will help push Jeep sales past the 800,000 mark this year for its third consecutive record year. If the ultimate goal is for Jeep to sell 1 million vehicles in 2015, they “do need to get a good chunk of that this year,” he said.