Board now focusing on location of new headquarters. 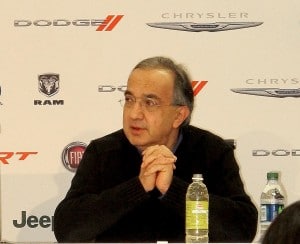 Sergio Marchionne agreed to a three-year contract extension to head up Fiat-Chysler.

While it debates what continent will house the headquarters of the newly merged Fiat-Chrysler, the company’s board cleared up its near-term leadership questions by extending Sergio Marchionne’s employment contract for three years.

Marchionne told reporters at the North American International Auto Show today that succession planning is a major issue for Chrysler, which is one of the key reasons he agreed to the extension. Previously he had suggested he would be ready to leave by the end of 2015.

“This issue about succession is a big, big issue in the group,” he said. “I am very proud of the leadership group we have assembled. But I’ve got to make sure there are replacement parts on hand. We worry about these things all the time.

“We would never expect to make an external hire. Our culture is different and we’ve spent a lot of time nurturing that culture.”

With the leadership issue resolved, the board can focus on determining the location of the company’s headquarters.

The fact the headquarters of the combined company could move to the U.S. has stirred up a large measure of anxiety in Italy, Fiat’s birthplace and home for more than a century. Marchionne, however, patiently explained to reporters the headquarters primary function would not change the operations at Fiat or Chrysler.

(Chrysler re-invents itself with next-gen 200 sedan. For more, Click Here.)

“We need to be careful when we talk about the headquarters. When we talk about headquarters, we’re talking about legal domicile and access. But they don’t impact the way the company is run. We look at capital on a global scale,” said Marchionne, who said he personally favor the shares of the combined company be listed on the New York Stock Exchange as well as the benefits that come with it. “We’re not one of the big but we are large enough where we need access to largest capital markets.”

As for the permanence of a headquarters, it’s less important to Marchionne due to the nature of his job.

(Click Here to get a look at the Ram’s Mossy Oak Edition.)