Let there be light: Korean carmaker out to win over disbelievers. 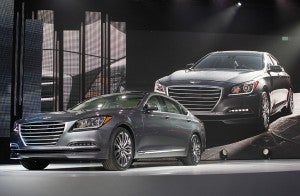 Hyundai aims to take its big Genesis up a notch when the second-generation sedan reaches market. Photo credit: Len Katz.

Let there be light, said the Korean carmaker and, lo, there was, proving to the many disbelievers that Hyundai actually could build something more impressive than a low-priced econobox.  The maker’s first effort to move up-market with the mid-luxury Genesis proved one of the big surprises of the last decade, winning an array of awards that included North American Car of the Year.

But was it more than just a one-time fluke? That’s the question skeptics continue to ask – and which the question Hyundai hopes to put to rest as it rolls out a second version of the big Genesis sedan for 2015.  TheDetroitBureau.com got an early look at the new model last autumn but, like everyone else gathering at this week’s North American International Auto Show, we’re taking a closer look to see just how far the Koreans have gone the second time around.

It doesn’t take more than a quick glance to recognize the answer is: quite a bit, certainly from a styling standpoint.  The original, 2008 Hyundai Genesis was a handsome enough car in a me-too sort of way.  This time ‘round, the Seoul-based maker is more confidently pushing the boundaries of its new Fluidic Sculpture design language – now dubbed version 2.0 — and to good effect. The 2015 Genesis doesn’t look a rip-off of anyone else’s styling. 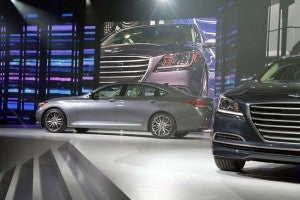 Befitting the nature of the luxury market, the new luxury sedan’s styling is a bit more subdued than edgier mainstream models like the Hyundai Sonata and Elantra.  There’s an emphasis on refinement in its curves and creases that will likely better stand the test of time.  In the words of chief designer Casey Hyun, the new model is “more voluptuous,” with “fewer lines and greater contrast.” That’s a fair description.

(Click Here to check out the 10 hottest debuts to watch at the Detroit Auto Show.)

The second-generation Genesis introduces us to a new hexagonal grille which, says Hyun, will become the new face for Hyundai, in general.  There are also new accent lights surrounding the now-standard HID headlamps.  LEDs also are used for the fog and taillamps.

Proportions are always important in automotive design – but all the more so in the luxury segment where a maker has to justify, at first glance, the premium it’s asking from buyers. Hyundai wisely chose to go with a rear-wheel-drive platform for the original Genesis, a strategy it maintains with the 2015 model. And that layout is clearly signaled with the sedan’s long hood and cab-rearward layout.

(Mercedes wants to set the new compact benchmark with the 2015 C-Class. Click Here to check it out.) 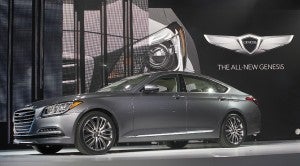 The new Genesis will offer buyers either a V-6 or a V-8 -- with HTRAC all-wheel-drive a new option.

Under the hood, the 2015 Genesis will be offered with two different engine options, a base 3.8-liter direct-injected Lambda V-6 making 311 horsepower and 293 pound-feet of torque. But the top-line powertrain is Hyundai’s big Tau V-8. At 420 horsepower and 383 lb-ft, it’s right up with the most powerful eight-bangers in mid-luxury segment, including the Mercedes-Benz E550 and Infiniti M56.

Both engines are paired with an 8-speed automatic gearbox.

The Genesis is available in rear-wheel-drive configuration though Hyundai has caught up with key rivals by adding a new all-wheel-drive package dubbed HTRAC.

There are a couple surprises. For one thing, Hyundai has stayed with a virtually all-steel architecture and body, unlike the growing list of competitors who have been migrating to lighter aluminum. As a result, the maker doesn’t expect to see much change from the 2014 Genesis sedan’s current 18/27 mpg City/Highway fuel economy rating with the Tau V-8.

On the positive side, Hyundai added more high-strength alloys to the chassis to stiffen up the 2015 Genesis and the drive of a preliminary prototype suggests that will translate into a noticeable improvement in ride and handling – two of the key challenges Hyundai engineers acknowledge they were aiming to address with the new model. 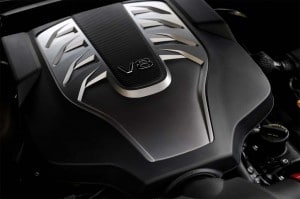 The original Genesis helped set the tone for an overall move up-market in the Hyundai line-up.  So, with the 2015 remake, the goal is to “set the standard for all (Hyundai) vehicles to come,” explained design chief Hyun, no low benchmark to have to clear. And the new model delivers with more elegant – and intuitively placed – buttons and switches, aluminum, wood and leather accents and such details as contrasting stitching.

(Infiniti pumps it up with Q50 Eau Rouge Concept. Click Here for me.)

The back seat is particularly well-equipped, Hyundai planners noting they took in mind the fact that buyers in China are more likely than not going to be chauffeured. Nonetheless, customers in the U.S. will appreciate this detail, as well.

Practical features include an improved gauge cluster, a new heads-up display system, a standard 8-inch center stack display – which can be upgraded to 9.2 inches with the 17-speaker Lexicon premium audio package.  There’s even a new SIRI voice search available for those who pair the Bluetooth system to an iPhone.

Technology has become a competitive battleground in the luxury market, and Hyundai promises to have plenty of ammunition at its disposal, including a variety of active safety systems, such as blind spot detection and Automatic Emergency Braking. It will bring the vehicle to a complete stop, if a potential crash is detected, at speeds up to 50 mph. Above that, the system will alert the driver and begin partial braking if the motorist hesitates. 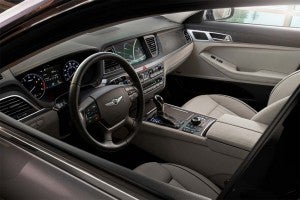 Hyundai also is introducing two new features. One is a carbon dioxide sensor which, the maker suggests, can sense whether a motorist might be getting drowsy.  The system will automatically vent the cabin if CO2 levels get above 2,500 parts per million.

Also on order is a new Smart Trunk system. It’s somewhat similar to the approach Ford has taken on models such as the C-Max – but you don’t have to waggle your foot under the rear bumper. The trunk will automatically pop open if you have the key fob in your pocket and stand next to it for three seconds.

Add it all up and Hyundai has big hopes for the new Genesis. The original sedan has done a lot to change perceptions of the brand, and Park Joon Hong, a researcher at the maker’s R&D center hopes the 2015 model, codenamed DH, will take things a step further.

“Hyundai cars are known for good value for money. But such perception can no longer make us competitive,” he said. The new Genesis sedan will have to stand on its own against some of the world’s toughest competitors whatever the price.