Infiniti Pumping it Up With Q50 Eau Rouge Concept 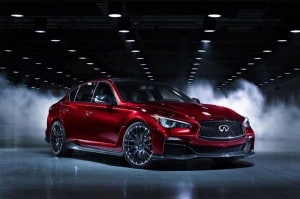 Infiniti is looking to bolster its image with some race-inspired concepts like the Q50 Eau Rouge.

Long an also-ran in the luxury car market, Infiniti is out to muscle its way into the first tier of upscale brands. And the new “racing-inspired” Q50 Eau Rouge Concept that is making its first appearance at the North American International Auto Show gives us a hint of what may be in store.

A lot has been happening, of late, at Infiniti. Nissan’s luxury brand has built a new headquarters in Hong Kong, gotten its own design and engineering resources, adopted an all-new model nomenclature – and for 2014 introduced the all-new Q50, a stylish replacement for the old G-Series.

Like its Japanese rival, Lexus, Infiniti has come to recognize that design alone isn’t enough. It needs to deliver some passionate performance, and for that it has turned to its Formula One partner, Red Bull Racing, along with its four-time World Champion driver, Sebastian Vettel, who now serves as a consultant to Infiniti – and who is credited with helping pull together the Q50 Eau Rouge Concept. 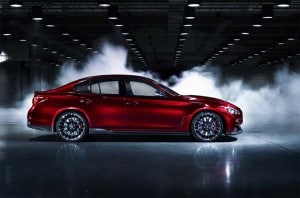 Clad in carbon fiber and boasting an engine rumored to produce more than 500 horsepower, could the Eau Rouge concept be Infiniti's future?

The foundation of the show car is the 2014 Infiniti Q50 sedan, but the Eau Rouge Concept’s body has been tweaked to improve aero, with major components redone in carbon fiber. The final result is a sedan that is both lower and wider. Key carbon fiber bits include the front splitter, rear diffuser and side sill skirts, as well as the roof and door mirror casings.

“If we built this car I would expect it to feature over 500 horsepower and 600 pound-feet of torque,” suggested Johan de Nysschen, president of Infiniti Motor Co. Ltd.

Where might Infiniti get such a powerplant, which is certainly not in its toolbox today? De Nysschen, a former Audi senior executive who joined Infiniti in late 2012, hints Infiniti might find some outside help.

“Through our various alliance partners we have access to a range of engines featuring this performance capability, which, with a fair amount of engineering effort, can be developed to exhibit Infiniti character and accommodated within the Q50 engine bay,” he said, adding, “The engine we are evaluating for the Q50 Eau Rouge is a big personality, V-cylinder engine with forced induction. I think our engineers have been waiting for a project like this.” 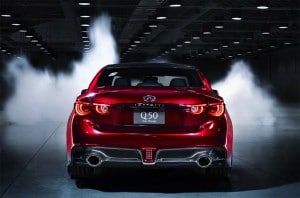 Racer Sebastian Vettel has been providing input into the Q50 Eau Rouge concept.

If one parses that comment carefully, it appears to suggest that the Eau Rouge Concept has a very good chance of working itself into a production model in the not-too-distant future.  But that raises even more questions, notably: is Eau Rouge set to become Infiniti’s answer to the Mercedes-Benz AMG line, BMW’s M and Cadillac’s V-Series?

(Mercedes closes the books on 2013 as the luxury sales leader. For more, Click Here.)

The answer might seem to be a resounding, “yes,” with de Nysschen saying, “Q50 Eau Rouge provides not only a glimpse of the design language, but also the performance capability of a future special series.”

Incidentally, the name, Eau Rouge, honors one of the most famous corners on the F1 circuit, a high-speed rollercoaster of a turn at the Spa-Francorchamps track in Belgium.

“The Eau Rouge corner complex is one of the most challenging and satisfying parts of any circuit in the F1 calendar,” said Vettel, who now puts in time as Infiniti’s Director of Performance. “The speed through it, the initial compression, extreme lateral G-forces and blind apex give you a big rush. Get it right and it’s incredibly rewarding. But it can also catch you out.”