GM “Fundamentally” in Favor of Expanding US Diesel Line-Up 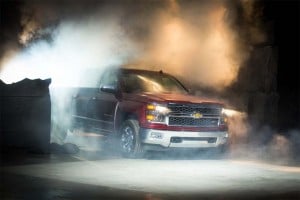 Expect to see GM add a diesel to the powertrain options for the light-duty 2014 Chevrolet Silverado.

With its first light-duty diesel set to debut in a manner of months, senior General Motors officials are giving clear indications that they’re ready to launch additional applications of the high-mileage technology, including a diesel for the next-generation Chevrolet Silverado and GMC Sierra pickups.

After years sitting on the sidelines, 2014 could be the year that diesels finally become a viable option for automakers struggling to meet tough need government fuel economy mandates.  Among the various makers that plan to launch or expand their diesel offerings are Mazda, Ford, Volkswagen, Audi and, soon, General Motors.

“There is, fundamentally, a place for diesel here,” said GM President Mark Reuss, during an interview following the preview of the completely redesigned 2014 Chevy Silverado and GMC Sierra pickups. The executive stressed that he is “personally” in favor of adding more of the so-called oil-burners to GM’s North American line-up.

The first light-duty offering will come later this year in the Chevrolet Cruze sedan which will begin being offered with a modified version of the diesel now available for the compact model  in Europe.

Though GM currently offers a diesel in its heavy-duty pickup line here in the U.S., it has stuck with gasoline power for the light-duty models. And a splashy Thursday preview of the 2014 Silverado and Sierra models focused on only three gas models, a new V-6 and two V-8s.  All will be significantly more fuel-efficient than the powertrains they replace thanks to the new use of such technologies as Direct Injection, Continuously Variable Valve Timing and Cylinder Deactivation.

But when asked about other options, Reuss pointedly suggested there will be “more to come,” a phrase he repeated when asked if that might include diesels.

“I personally think there’s a place for diesels” in the truck line-up “in the future,” he indicated.

There have been some concerns raised about whether the technology could meet upcoming revisions to federal emissions standards which further tighten restrictions on particulates and oxides of nitrogen. Reuss said improvements in after-treatment systems mean diesels are “getting better” and should be able to comply.

Of course, that raises the issue of cost, but various sources at both GM and its competitors have indicated that with diesel volumes increasing costs could come down at least somewhat.  The question is whether that would be enough to satisfy consumers.

A senior GM executive, asking not to be named discussing the maker’s strategy, said that in consumer clinics, potential buyers showed strong interest in the advantages of modern diesel technology, primarily the added fuel economy. But while they expressed a willingness to pay a premium the numbers they cited were significantly less than the actual mark-up that would be needed to cover the cost of diesel technology.

Those makers currently offering diesels in the U.S. – German manufacturers Mercedes-Benz, BMW, Audi and Volkswagen – are charging premiums of $1,000 or more.

Yet, there appear to be a growing number of buyers who are willing to cough up the extra money.  More than one in five VW Passats sold in the U.S. now come with diesels and Jonathan Browning, CEO of the Volkswagen Group of America, has told TheDetroitBureau.com that he believes that as the maker expands its capacity for diesels the figure will soon near one in three.

Audi, meanwhile, plans to add four new diesel models in 2013 including versions of its Q7 coupe-like-sedan and flagship A8.

Mazda will become the first Japanese automaker to add a diesel, a version using the maker’s new SkyActiv technologies, when it launches sales of the next-generation Mazda6 sedan next year. (Click Here for more on the Mazda6 diesel.)

Even Ford, which has said it will focus on both electrification and its EcoBoost gas engines – which borrow diesel systems such as turbocharging – this week announced plans to add a diesel to the powertrain options for the new Transit van. That full-sized truck will replace the aging E-Series next year. (For More, Click Here.)

Proponents like GM’s Reuss believe there is a place for diesel in the U.S. market and that the technology can complement, if not replace, high-mileage alternatives such as hybrids.

The big question is one of customer acceptance. U.S. motorists were turned off to diesels by the versions of the technology that were sold here back in the ‘80s. They were noisy, smelly and slow. Today’s modern diesels – which account for nearly half of all new vehicles sales in Europe – are smooth, clean and quick. The big challenge is getting buyers to accept the price premium, though it is generally less than that for better-based systems.

GM is likely to detail more of its diesel plans by the time the new Chevrolet Silverado and GMC Sierra pickups reach market early in the second quarter of 2013.