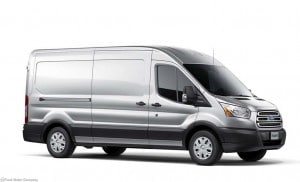 Ford's new Transit van will be offered with the maker's new Power Stroke I-5 diesel.

Ford Motor Co. has done something of an about-face on diesel power, the maker deciding to introduce a 3.2-liter “oil-burner” for the new Transit van it will launch in the U.S. market next year.

It will mark the first time Ford has offered a diesel in a van for the American market since phasing out its Power Stroke V8 in 2010. And with the announcement Ford becomes the latest in a still-small but fast-growing list of manufacturers hoping to boost mileage – and build demand – with high-mileage diesels.  Mazda last month confirmed long-expected plans to offer a diesel in its new Mazda6 sedan.

Ford has long waivered on making a commitment to diesel, new Chief Operating Officer Mark Fields only last month saying there were no plans to offer the technology in its U.S. passenger car line-up. Instead, Ford has been focusing on its distinctive EcoBoost engines and an expanding line-up of battery-based powertrains.  But it appears the maker saw an opening – and growing demand – in the commercial sector for diesel power.

Ford does offer another diesel in North America, a 6.7-liter Power Stroke V-8 – but only for its larger F-Series pickups.

Ford said it does not have final specifications for the new 3.2-liter diesel, an inline-five, but in European trim it is making 197 horsepower and 347 lb-ft of torque.  Significantly, it will be tuned to handle B20 biodiesel, which is gaining increasing acceptance in the diesel market.

The engine will be imported from South Africa and mated to the new Transit van at the Kansas City Assembly Plant.

The Transit is the big brother to the compact Transit Connect which was introduced into the U.S. market several years ago.  It will replace the long-lived Ford E-Van. Both models are undergoing a complete redesign for 2013.  The Transit Connect will continue to be shipped in from Europe.

Despite the doubling of its diesel line there are still no indications Ford will move one of the high-mileage engines into its passenger car line despite having a wide range of diesel alternatives in Europe – where the technology currently accounts for about half of total new vehicle sales.

But other manufacturers are beginning to see a strong opportunity for diesel, especially with gasoline prices expected to soar once the U.S. economy fully recovers and demand for fuel consequently revives.

Mazda is the latest to introduce a diesel, in this case an engine that will make use of its new SkyActiv technology. While the maker isn’t ready to release official specifications, TheDetroitBureau.com was told by sources that Mazda is looking for highway mileage in the mid-40 mpg range, which would make the midsize sedan competitive with products like the Toyota Camry Hybrid.

Mazda also plans to take the diesel onto the track – a largely stock version of the four-cylinder engine set to debut in the GX Class during the Rolex 24 endurance race in Daytona next month.

Until now, diesels have largely been limited to European offerings and makers like Volkswagen have seen a rapid growth in demand. If anything, sales have been limited by availability, contends VW of America CEO Jonathan Browning. He has won approval to build more diesels for the midsize Passat and believes the fuel-efficient engine will soon account for nearly a third of the sedan’s U.S. sales.