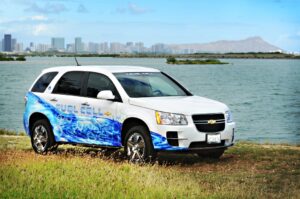 The state of Hawaii wants to reduce petroleum use by 70% within a generation.

General Motors and The Gas Company (TGC), Hawaii’s major gas energy provider, announced today a hydrogen infrastructure project that will use an estimated five to 50 of GM’s fuel cell vehicles as part of the program.

Hawaii could benefit from hydrogen-powered fuel cell transportation because it depends on imported petroleum for 90% percent of its energy use.  Gasoline prices are among the highest and electricity prices are the highest in the U.S.

However, fuel cells continue to face many challenges, including extremely high costs for both the energy and the fuel cell vehicle, as well as limited range.  One solution to overcome range anxiety is under development at GM, but it requires large, high-pressure  hydrogen tanks (700 bar, 128 Kg), which can take up much of the usable space of a car, to allow for 300 miles between  refills.

TGC already produces hydrogen along with synthetic natural gas and delivers it in its utility gas stream, with more than 5% hydrogen content today. Through a proprietary separation process, TGC plans to tap into its 1,000-mile utility pipeline system at several locations and separate the hydrogen for use by local fueling stations, estimated at 21, for fuel cell vehicles.

“This is the type of enabler that a hydrogen transportation infrastructure needs because it addresses both the source of the hydrogen and a feasible way to deliver it for fuel cell vehicle use,” said Charles Freese, executive director of GM Global Fuel Cell Activities. “The Hawaii infrastructure could eventually support tens of thousands of fuel cell vehicles.

The state of Hawaiian wants to reduce petroleum use by 70% within a generation by switching to a combination of renewable energy resources, as well as increasing conservation and efficiency.

“We have been delivering as much as 12% hydrogen made from renewable sources to our gas customers over the last two to three years and expect we can deliver even greater quantities of hydrogen as demand increases,” said Jeffrey Kissel, president and CEO of TGC.

TGC is producing the equivalent of 7,000 gallons of hydrogen a day now, and can double that with minimal changes.

“By delivering hydrogen through our existing infrastructure as vehicle fuel wherever we have gas, The Gas Company expands its key role of supporting Hawaii’s clean energy future,” Kissel said.

Depending how the pricing for the hydrogen is set, it could be available at the equivalent price of gasoline. TGC said the cost is subject to the vagaries of public utility commission approval, and not knowing what the retail markup will be by the service stations. Conversion of an existing gas station to add one hydrogen pump is estimated at $300,000 to $500,000.

GM has invested more than $1.5 billion in fuel cell transportation in the last 15 years, and is developing a production-intent fuel cell system that could be ready for commercialization in 2015. (See GM Fuel Cell Production Ready by 2015? ) Production ready does not necessary mean production pricing, as we currently know it,though.

The 119 older generation Chevrolet Fuel Cell vehicles that are part of Project Driveway, the world’s largest demonstration of fuel cell vehicles, have amassed nearly 1.4 million miles of real-world driving by thousands of people since 2007.

The GM-TGC collaboration is part of a broad consortium of federal, state, non-profit, and education organizations that is forming to develop a Hawaii Hydrogen Initiative as part of an integrated energy solution for Hawaii’s future.

“Every step to reduce our dependency on foreign oil is a move forward,” said. U.S. Senator Dan Inouye, D-Hawaii, who supports the project.