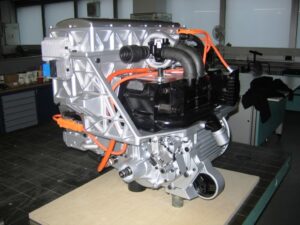 The latest fuel cell system is 220 pounds lighter and about half the size of the one used in the Chevrolet Equinox Fuel Cell electric vehicle.

General Motors Company is testing a “production-intent” hydrogen fuel cell system that can be packaged in the space of a traditional four-cylinder engine and be ready for commercial use in 2015.

No cost or performance information has been released by GM.

The second-generation system is half the size, 220 pounds lighter and uses about a third of the platinum of the fuel cell in the Chevrolet Equinox electric vehicles used in Project Driveway. (See One Million Miles of Fuel Cell Testing at Chevrolet )

The electric Equinox runs on electricity created by an on-board fuel cell stack similar to ones used the space program and almost as expensive. The U.S. Department of Energy estimated in 2008 that in volume production electricity would be made at $73 a kilowatt. A kilowatt hour (KWh) of electricity in Michigan for residential customers costs 15 cents or less.

In spite of the enormous technical challenge, the attraction of a fuel cell is that the only emissions created are water vapor — if you do not take into account how the hydrogen fuel is created that the Chevrolet fuel cell uses.

GM has the world’s largest market test and demonstration fleet of fuel cell electric vehicles in use, and since 2007 and it has tallied nearly 1.3 million miles of driving in cities around the world.

“Our learning from Project Driveway has been tremendous and these vehicles have been very important to our program,” Charles Freese, executive director of GM’s Global Fuel Cell Activities told reporters Tuesday at a news briefing on GM’s fuel cell progress.

“The 30 months we committed to the demonstration are winding down, but we will keep upgrades of these vehicles running and will continue learning from them while we focus efforts on the production-intent program for 2015,” said Freese.

Some of the 119 fuel cell electric vehicles in Project Driveway will receive hardware and software upgrades and will become part of a technology demonstration program with the U.S. Department of Energy.

Others will be driven by businesses and a few will be used to continue showing that, with proper fueling infrastructure, hydrogen fuel cells are a viable alternative to gasoline-powered vehicles.

The first long-term loan of the new-look Chevy fuel cell vehicle will be to Stephanie White, a fuel cell advocate (dare I say “true believer?”) who was among the first Project Driveway participants and regularly blogs on her vision for a hydrogen economy in which zero-pollution fuel cells are a mainstream source of transportation. Freese presented White with the keys to the car earlier this week.

Driving the Chevy fuel cell around LA has been an amazing experience,” White said. “People are always stopping me to ask questions about the vehicle and I tell them how powerful and eco-friendly it is.”

Too bad it’s not economy-friendly at this time.