Toyota owners are unhappy about the performance of the system, calling it defective. Pedestrian lives at risk? 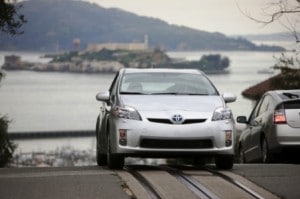 Drivers are unhappy about stopping distances on bumps, tracks and slippery surfaces.

Dozens of owners of the current third generation Toyota Prius models have filled complaints with the National Highway Traffic Safety Administration about the alleged brake failures they have experienced.

The Office of Defects Investigation has at least 33 complaints that we are aware of from Prius owners alleging a problem or safety defect, often about the design or performance of the braking system, which recharges the battery when the Prius decelerates.

Some owners describe this as unintended acceleration, but a review of the complaints by TheDetroitBureau.com leads me to think that this is an issue about how the braking system is calibrated. Whether this is a safety related defect is ultimately up to NHTSA to decide. The safety agency is authorized to order manufacturers to recall and repair vehicles when ODI investigations indicate that they contain serious safety defects in their design, construction, or performance.

For Toyota, it is another owner satisfaction or quality issue, at a minimum, coming from its most advanced technology vehicle at a time when Toyota is under attack for its handling of safety matters.

In the case of the Prius brakes, it appears that the transition from regenerative braking to hydraulic braking is not transparent to drivers. Under certain conditions, the driver needs to press harder on the brake pedal to obtain the same stopping performance that the regenerative system working in conjunction with the hydraulic brakes initially provides. Drivers are clearly upset by longer than expected stopping distances when the antilock system shuts off  the regenerative brakes.

“What I, and others have been experiencing, is certainly not “runaway acceleration” or anything to do with pressing the gas pedal,”  Robert Becker, an unhappy owner of a 2010 Prius, told TDB.

“But rather the loss of braking power or braking momentum when hitting a pothole, manhole cover, or the like. This requires the driver to press down again harder on the brakes to slow or stop the car,” Becker says.

Becker’s complaint is typical of others that ODI is tracking from owner communications on its Auto Safety Hotline. However, the existence of complaints does not mean the government will ultimately pursue the matter. The next steps would be to open up a preliminary investigation, which could be followed by an engineering analysis, which could  lead to a recall. Neither have been initiated by NHTSA thus far.

Here is another Prius driver filing: “There have been several incidents in which my car seemed to surge forward while I was in the process of braking and hit a bump, railroad tracks or pothole. Initially, I convinced myself I must have been letting up on the brake when I hit the bump, but when this same thing happened three  days ago on slippery, icy roads, I knew for 100% certain I had not let up on the brake. My car surged as I was slowly pulling up to a stop sign and gently braking. I came very close to hitting the car in front of me, had to push down on the brakes very hard, which activated the abs.”

I think what is going on is a combination of design/calibration choices and the compounding effects, forgive the pun, of the low rolling resistance tires, suspension settings and perhaps vehicle weight.

The Prius is arguably Toyota’s strongest image vehicle, dominating the hybrid segment as the best seller with more than 1 million in sales to date, and disproving other automakers’ contentions that Japanese companies only copied instead of innovating.

A Toyota spokesperson initially told TDB that he was unaware of the issue, but Toyota quickly supplied the following statement: “We are aware of the complaints filed with NHTSA. The agency has not opened an investigation. We are investigating the issue based on internet traffic, customer comments to Toyota Customer Relations, and NHTSA complaints. It is too early to speculate the final conclusion(s) of our investigation and subsequent actions.”

NHTSA would only confirm that no recall or formal investigation is underway. The ODI complaints are a matter of public record, though.

Nonetheless, an internal NHTSA memo says: “It appears that when you hit a bump, the regenerative braking (front wheels only) cuts out, and there is a short delay until the friction braking kicks in. This results in loss of braking, which is experienced as acceleration (due to sudden end of deceleration from braking). Net impact is still a loss of braking/ increase in stopping distance. This could be fatal for pedestrians — it happens when approaching stop lights if you hit a pothole.”

Toyota is in the midst of huge recalls involving floor mats and accelerator pedals (3.8 million vehicles) and rusty Tundra frames (+100,000), among others; and it faces lawsuits alleging the withholding of evidence in safety investigations, as well as new charges of unintended acceleration, and stalling in some of  its most popular models.

Toyota’s worst year for recalls, ever

It is difficult, though, to attribute the Toyota brand sales decline in the U.S. – off  24% year-to-date, about the same as industry results — to a damaged reputation, in spite of much self-serving media and analyst commentary claiming such.

However,  the longer safety and customer satisfaction matters remain under media and government scrutiny, the more serious the potential consequences. The company announced last week the retirement of its long time group vice president of environmental and public affairs, which could be coincidental or not.

The dealership that sold Becker the car recommended that a Toyota field technician check on his complaint. The technician, according to Becker, acknowledged the condition, but stopped short of characterizing it as a safety issue.

While he initially was looking for a fix for the problem, Becker now wants a full refund of the purchase price of the vehicle, something the company is unwilling to do thus far.

“It makes me question Toyota’s commitment to customer service and safety,” Becker says.