What started in '97 as a niche is now a formidable business. 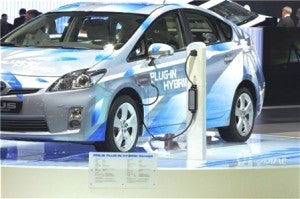 Next Prius is a plug-in hybrid design, although Toyota remains leery of lithium ion batteries.

Toyota Motor Corporation (TMC) has steadily expanded its line-up of hybrid-electric vehicles, or HEVs, since launching the first version in Japan, the “Coaster Hybrid EV,” during August of 1997. The Prius followed  that December in Japan, and sales of the mass-produced Prius models began in North America, Europe and elsewhere in 2000.

Executives at other Japanese companies, as well as U.S. and European automakers, scoffed at what was a technological triumph. Only Honda was seriously pursuing this emissions cutting and fuel economy-increasing technology during that period.

Today, virtually all other makers are scrambling to catch up with the innovation, while also trying to protect their investments in older technologies at a time when regulations are making it increasingly expensive, perhaps prohibitive to pursue both paths at once. Add in the ongoing negative  effects of the Global Great Recession, with its concomitant collapse of vehicle sales — especially in what were the most profitable big truck and SUV segments, and the collapse of the  luxury segments — and you have a potential radical recasting of the global automotive order.

I am reminded of the lead of Tale of Two Cities with fat kings and queens on long established thrones thinking things were pretty much settled forever. Some older automotive companies and their royalty are now in a similar position.

Worse, if you are a competitor, Toyota promises to eventually offer hybrid technology in virtually every product in its line-up. A clear challenge to the established monarchies. And this challenge doesn’t stop there. As TheDetroitBureau.com first reported last month, senior American officials at Toyota have been seeking to broaden the use of the Prius name, essentially creating a hybrid-based brand-within-a-brand. It could therefore become the strongest  global name in automotive  history.

Yes, there are caveats here aplenty.

The first is Toyota’s own weakened financial position, which has and will slow down its expansion of hybrids. Iits operating income has drastically declined in all  sectors: Toyota Motor Corporation finished fiscal 2009 with a huge $7.7 billion loss during the fourth quarter of the traditional Japanese year, which ended March 31. The fourth quarter loss left the Japanese auto giant with a decidedly non-traditional full-year loss of $4.4 billion, the largest in the company’s 71-year history. Net revenues dropped 22%.  Toyota also released guidance that it expects another loss ¥550 billion or nearly $6 billion for the coming year. The company, used to never-ending expansion, is having extreme difficulties managing a forced contraction.

However, virtually all other automakers are having the similar problems. And they don’t have the experience in  hybrid technology, so catching up will be hard — and complicated by the  experience,  intellectual property rights and the patents Toyota holds. And here, Toyota’s record of hybrid design progression and sales expansion is formidable.

What happened after the  initial Prius revolution, that caught automotive royalty eating cake, is a tale of a changed world. Toyota’s  next big step was  the second-generation Prius in 2003 and the expanded use of its hybrid system to minivans, SUVs and rear-wheel-drive sedans. As a result on May 31, 2007, the global cumulative sales of TMC’s hybrid vehicles topped 1 million.

This year, TMC continued to expand its hybrid vehicle lineup, launching the Lexus  RX450h in April, the third-generation Prius in May and the Lexus HS250h—the first dedicated Lexus hybrid model—in July.

All three vehicles are well received, although the Great Recession has drastically decreased the planning volumes. Nonetheless, they are expected to contribute to the ongoing popularization of hybrid vehicles. 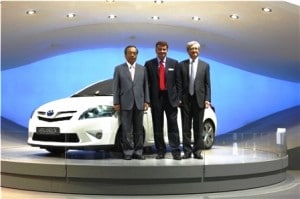 Toyota announced at Frankfurt, that a hybrid version of the Aurus will be produced in the U.K.

As of August 31, 2009, TMC calculates that TMC hybrid vehicles since 1997, have resulted in approximately 11 million fewer tons of CO2 emissions—widely considered to be major factor in global warming—than would have been emitted by gasoline-powered vehicles of similar size and driving performance.

Given the history, I wouldn’t bet against this happening.